The Cinema Society and Bally Switzerland hosted a screening of the new nail-biting thriller at the Tribeca Grand Hotel in Manhattan. 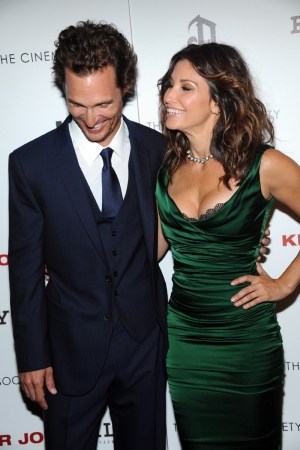 On Monday night, The Cinema Society and Bally Switzerland hosted a screening of the new nail-biting thriller “Killer Joe” at the Tribeca Grand Hotel in Manhattan — and star Matthew McConaughey wasn’t apologizing for his character’s egregious behavior. “As an actor, you don’t take on a character and get moral about it,” said McConaughey about playing seemingly carefree assassin Joe Cooper. “You stick with your man and work on the humanity of it.” The movie takes place in Dallas, a setting that mirrored the film’s suspenseful feel. “There’s a certain sensibility [in the South], there’s a certain pace, there are certain rural areas that would scare you [because] no one can hear you scream,” said McConaughey.

Donning an emerald Dolce & Gabbana dress and Bally accessories, costar Gina Gershon chatted briefly about the movie’s NC-17 rating. “This movie is the only one [she has worked on] that maybe deserves it,” said Gershon, who named one particularly disturbing scene involving herself, McConaughey and a chicken leg. “The violence is against people who have done bad things. It’s crime and punishment basically.”

The film’s director, William Friedkin, perhaps best known for his work on the 1973 horror classic “The Exorcist,” echoed the sentiment. “They gave the right rating,” he said. “The idea of the film freaked [people] out more than the details. It’s about violence and sexuality in the real world [and] people who are trapped in their own dreams and can’t escape the reality they are in.” Screenwriter Tracy Letts’ script was inspired by a true story, as well as “the extremes of bad behavior.”

Despite the seriousness of the film, those at the screening shared a few laughs throughout. “It’s cheerful in immorality,” said McConaughey.