To toast its new store in the Central district, the Italian brand threw itself a party featuring — what else — a fashion show. 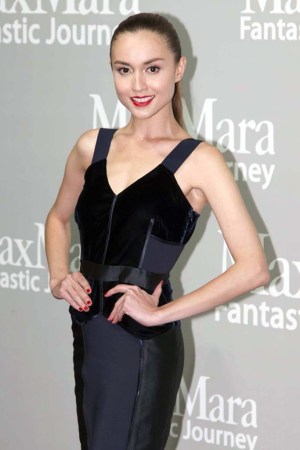 HONG KONG — To toast Max Mara’s new flagship in the Central district here, the Italian brand threw itself a party featuring — what else — a fashion show.

Typhoon Vicente — which blew through the city last night, shutting down offices and businesses until nearly noon today — didn’t appear to put a dent in attendance. The star-studded event went forward as planned, hosting about 1,000 people at Shaw Studios in the new territories.

Local celebrities, such as singer Coco Lee and Kelly Chen, a singer and actress, turned up clad in Max Mara. Also present was Lynn Xiong, a model and current girlfriend of Aaron Kwok, a famous Hong Kong singer, dancer and actor.

“Clothing shouldn’t reveal the ‘three points,’ ” Xiong said, prompting reporters to giggle. “I like fashion to be fashionable but not too wild,” she added.

Guo Jingjing, the celebrated Chinese diver who won two gold medals at the 2008 Beijing Olympics, was also at the event.

“As an athlete, I usually dress for comfort,” she said, making an exception for Max Mara, which she described as “comfortable and elegant.” Guo, who is set to marry Hong Kong tycoon Kenneth Fok in September, wished the Hong Kong and Chinese athletes good luck at the upcoming Olympics in London and hoped they will “not be too nervous.”

In line with the party’s “Fantastic Journey” theme, the cavernous cocktails room featured floor-to-ceiling slides of exotic locales. Company executives and celebrities sipped pink sparkling wine and nibbled on canapés in the roped-off VIP area located in the center of the room.

Later in the night, the crowd was ushered into another cavernous room for the fashion show. Video of clouds and sky was projected against the walls and ceilings, shifting from bright blue sky with white fluffy clouds to a moody sunset to a night sky with stars. Mina Mazzini’s hit “Se Telefonando” played on repeat until the crowd took their seats.

Inspired by the theme of luxury travel, the fashion show featured pieces from the fall 2012 Milan fashion show, as well as exclusive Max Mara Atelier coats and Max Mara Elegante evening pieces that were designed for the occasion.