Hailee Steinfeld was honored with the organization's Face of the Future award. 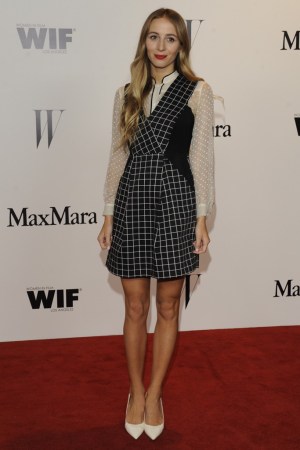 There’s nothing like a change of venue to shake up a party. Women in Film’s annual fete, hosted by Max Mara’s Nicola Maramotti and W magazine, took place Tuesday night at the Beverly Hills Hotel’s Polo Lounge, which Hailee Steinfeld, recipient of this year’s Women in Film Max Mara Face of the Future award, declared “so Old Hollywood.”

“I love this event because it feels so relaxed,” said Brewster. “It’s not a stuffy industry event.”

That didn’t stop guests from talking shop. Steinfeld was heading to Romania on Thursday to film “The Keeping Room” with Sam Worthington and Brit Marling, while Winstead was staying local. “I’m working on two indie films this summer and my first album,” she said. “We just made our first video with all women producers, directors and actors, which isn’t the norm in the music world.” Produced by Dan the Automator, the album will be released by EMI in August. Garcelle Beauvais said she was working on her first children’s book, and Olivia Munn was headed to New York to star in a film for Jerry Bruckheimer.

“He actually handpicked all the actors, which is a first for me,” she said. “It’s proof that if you keep your head down and work hard, people will take notice.”