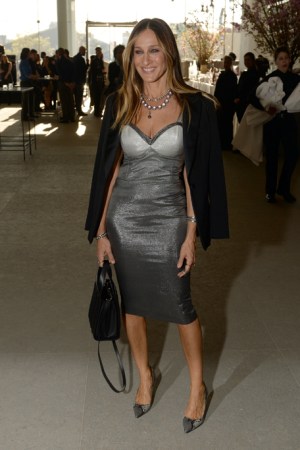 After five years of design, development, construction and transportation of some very pricey art, the Whitney Museum is finally ready to open the doors to its new downtown location. But first, a dinner party.

On Friday night, while a grand opening (well, not entirely grand as this was on the tail end of a spate of Whitney inaugural bashes) was unfolding throughout the space’s numerous galleries, Max Mara sponsored an intimate dinner on the museum’s top floor. The guest list was largely made up of artists, several of whom occupied some decent real estate in the below floors (Julian Schnabel, Laurie Simmons, Fred Wilson, Mario Sorrenti), museum board members, and a pair of bona fide celebrities for good measure: Dakota Fanning and Sarah Jessica Parker, both in Max Mara, of course.

“I saw the Jeff Koons exhibit at the uptown Whitney pretty recently,” Fanning said of her history with the museum. “It’s really exciting because I live downtown and it’s nice to have this a little bit closer.”

Parker had yet to explore the space. “I’m so freaking excited,” she said. “I feel like I won the lottery! All I want to do is start roaming the halls.”

Roaming would have to wait until post-dessert. Instead, dinner guests chatted over plates of arugula salad and sea bass, taking in the sunset view of downtown Manhattan. “I wonder if I can see anything naughty going on,” a curious guest asked, squinting to get a better look into the windows of the Standard Hotel, across from the dining room.

Between courses, Renzo Piano, the architect behind the structure, shared some remarks at the insistence of the museum’s board members. “They say a singer should never explain a song,” he said. “This is a nice moment and sad moment. It’s nice because we finished the job, but it’s sad because the building was my building, our building, up until yesterday. But now, it goes to the community.”

And sure enough, guests spilled into the main gallery space around 9:30 p.m., packing what had just been an empty building a week before. Solange Knowles, Prabal Gurung, Betsey Johnson, Barbara Bush, Julie Macklowe, Cecilia Dean and Julia Restoin-Roitfeld traipsed the floors while Harley Viera-Newton, St. Vincent and Zoë Kravitz upped the house party vibe with their respective DJ sets.

“Did you ever read ‘From the Mixed Up Files of Mrs. Basil E. Frankweiler’?” Parker asked, speaking to WWD between songs. “It’s wonderful. Go get it on your Kindle or electronic machine. It’s about two children who run away from home and hide in the Metropolitan Museum of Art, and it’s a heavenly night.”