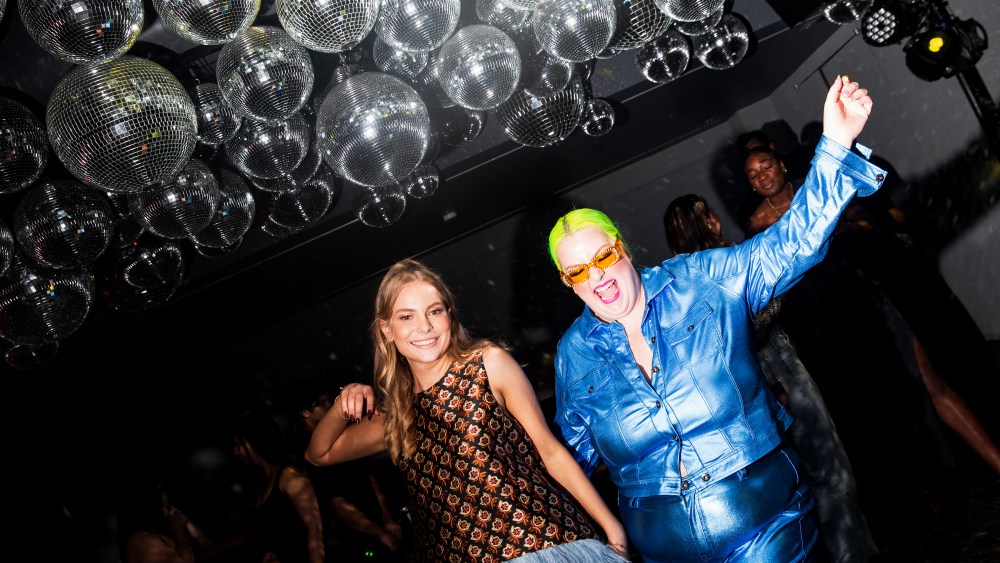 The party was under the disco balls at The West Hollywood Edition on Thursday night.

“It brings people to the dance floor,” Danielle Lauder said of the glittering lights — in all their reflective glory inside the basement club Sunset.

Bodies were packed, getting down to the Afrobeat sounds of DJ Bad Colours. Maxwell Osborne was in the center, twirling his mom.

“I’m exhausted, but I feel relieved and happy,” the designer said of presenting AnOnlyChild’s latest collection hours earlier at Lighthouse ArtSpace as part of Los Angeles Fashion Week. It was its second stop, with a few additional tweaks, after debuting at New York Fashion Week.

“When the opportunity arose — we’ve been getting a lot of deadstock from L.A.,” he said. “We’ve been coming to L.A. pretty often for the past year-and-a-half. It’s a new energy kicking off L.A. Fashion Week. We wanted to show it and have a different experience.”

Lauder, tapped as beauty adviser for LAFW, helped bring that vision to life with beauty — securing Estée Lauder and Aveda for glam.

“They wanted really clean, natural makeup but with a fierce look, so they did strong eyes on the girls,” Lauder, great-granddaughter of Estée Lauder, explained.

“It was cute as f–k,” exclaimed artist and Fenty model Margie Plus of the looks.

Plus, who was sponsored by Lauder to snap social content, had a front-row view with the likes of Michael B. Jordan, Tyga and Jesse Williams.

The latter two joined the party, Tyga in a corner all night, while Williams hung out in a booth with artist Ferrari Sheppard.

“It was just such a cool vibe,” Plus went on. “He mixed these silk, beautiful garments with that street New York edge that he’s known for. Mix of edge and glamour.”

Osborne — who broke onto the scene with Public School alongside Dao Yi-Chow, later codesigning DKNY — first introduced AnOnlyChild to friends and family.

“Everything we do is supposed to be intimate,” he said.