The art world came out in chic droves to honor Maya Lin and Louise and Leonard Riggio Saturday night.

Don’t be fooled by the humble green fields and quiet highways of Water Mill, N.Y. — on Saturday night, the town played host to an ultrachic event at the Parrish Art Museum.

For its annual Midsummer Party, the museum honored artist and designer Maya Lin and arts patrons Leonard and Louise Riggio; the crowd skewed heavily toward the arts world, natch. Shantell Martin, Mary Heilmann and April Gornick were seen alongside the actor Matt Dillon. Guests wore artful dresses and unique bags, like a minaudière that said “party” in lucite letters or a Chanel purse shaped like a lifesaver. Outside, vintage Jaguars, Alfa Romeos and Teslas of all models were waiting to be valet parked.

The Riggios are longtime friends of Lin’s, and in fact have a piece of hers permanently installed in their Bridgehampton home. Although the Riggios tend to eventually donate or sell the artworks they acquire, Lin’s five-acre lawn sculpture won’t be going anywhere.

“It’s permanent. Just ask the landscapers who bulldozed and installed it in about six weeks,” Louise Riggio said.

Leonard Riggio, who is the founder and executive chairman of Barnes & Noble, will soon hang up his hat at the bookstore chain and retire. What’s the first thing he’s planning on doing?

“He’s going to take his wife out for lunch!” Louise Riggio retorted.

Lin’s own work was inside the gallery where cocktail hour took place before dinner — installed on the wall was her “Bay Pond and Harbor Long Island” triptych. The artist and designer has always touched on environmental concerns through her pieces, and these days her mission statement is only slightly different.

“I started out wanting to just reveal things about nature that you might not be thinking about,” she said. “I have become much more of a ring the alarms, we don’t have much time, we could fix this but we all have to do something kind of personal when it comes to climate change. I’ve become more of an advocate.

“I’ll be in a show with Anne Hamilton and Jenny Holzer at the Wexner Center for the Arts,” she added, saying climate change has certainly influenced her present projects. “One of my pieces is the Ohio River — but as a flood plain. Because that is literally what’s been inundating the entire Midwest.” 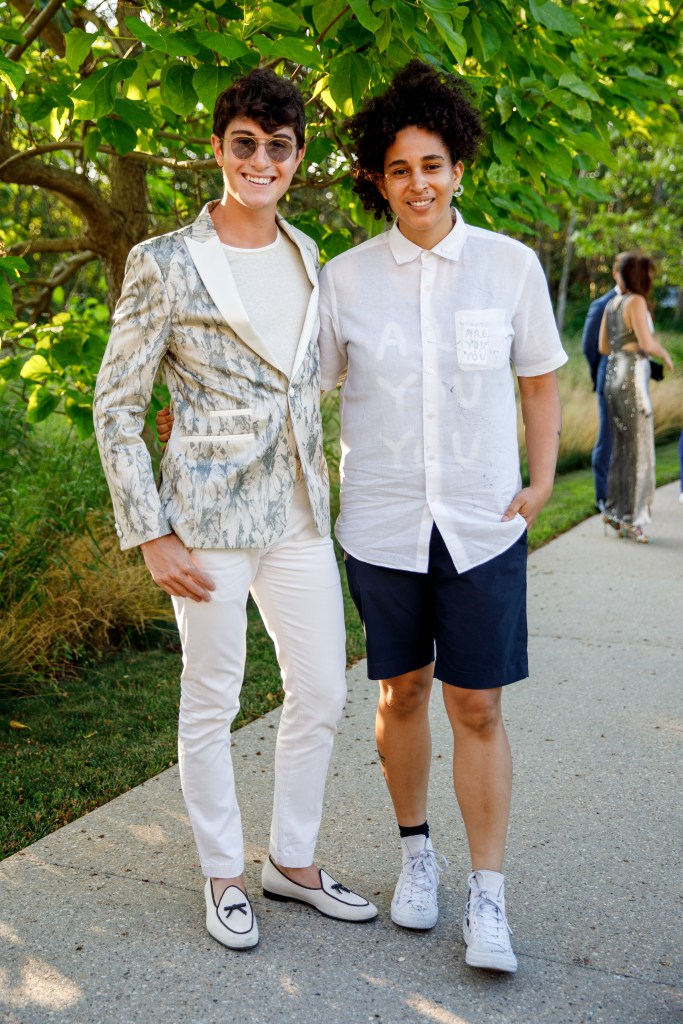 Martin, meanwhile, chatted with friends. One of them asked the artist excitedly to make a piece for her new home. But the 38-year-old from London has her hands full, what with a book coming out next year, an installation at the Denver Art Museum and a project she’s started on Governor’s Island: transforming an abandoned church into a space for “poetry and contemplation,” she said. She’ll be painting both the interior and exterior spaces, and wasn’t fazed when asked about the intense scale of having an entire building as her canvas.

“It’s funny, the church is actually quite a small scale compared to some of the projects I’ve just worked on,” she said. “Someone described me as a drawing gladiator. That feels accurate. Sometimes I take on these projects which are really large and when I look at them they’re so intimidating to start off with. Then I fight through it in a really triumphant way.”