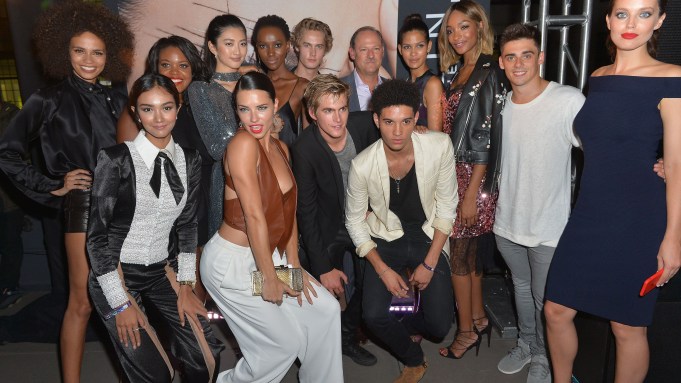 Maybelline is going where the boys are this fashion week.

Among the guests at the L’Oréal-owned makeup giant’s party on the roof of Hudson Mercantile Wednesday night were young male models Neels Visser, Markel Williams and Presley Gerber. The new spokesmodel crew, dubbed “the Maybelline guys,” isn’t typical of what one would expect to see from a beauty brand — unless you take into account their social media followings. Combined, they total close to two million on Instagram alone,  presumably composed of the teenage girls the brand would like to capture the attention of.

“When I first heard about it, I was like, ‘Wait, what? I’m not wearing makeup, am I?’” said Visser, who is 17 and appears this fall in American Eagle’s campaign. Visser and the other models — they’re all signed with IMG — have been tasked with documenting New York Fashion Week on behalf of Maybelline for their social media followers.

Gerber, who is also 17, was more game when the subject of wearing makeup came up. “Yeah, I’d give it a shot,” he offered optimistically. The son of Cindy Crawford, Gerber isn’t sure yet if modeling is a sustainable career for him. “My sister is following in my mom’s footsteps,” he said with a shrug, referring to Kaia Gerber, who is the face of the new Marc Jacobs Beauty campaign. “For me, I’m just exploring my options.” The entire Gerber clan — including dad Rande, apparently also a fan of Snapchat as he was spotted filming a panoramic shot of the rooftop affair — was in attendance, though they arrived late after attending another event with Kaia.

Twenty-one-year-old Williams had a more succinct response when asked if he’d ever consider wearing makeup. “I don’t get it.”

Though makeup aficionados they are not, the guys do know a thing or two about beauty and style. “Just be yourself…if you like it, wear it,” said Williams of his personal style strategy during fashion week. “But you know, since there’s paparazzi, bring your A-game clothes,” Visser chimed in. “Most importantly, water, sleep and eating healthy,” Visser said of his fashion week beauty routine. “Eating proteins and stuff like that.”

With the trend in beauty at New York Fashion Week the past few seasons being the concept of individuality, the presence of a beauty brands at fashion week is called into question. Party attendee Adriana Lima wasn’t buying it. “Makeup is important — it’s part of the expression of the designer,” she told WWD. “I cannot see a fashion show without makeup.”