Actress Jennifer Saunders gets into character at designer’s annual celebration. 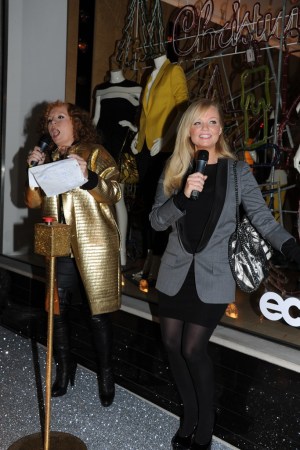 Christmas in “Ab Fab” land, not surprisingly, is one big drag: “What is Christmas? I don’t understand Christmas. Oh, where are we going to eat? You’ve got to make it yourself. Oh, who’s going to get me a present? No! You’ve got to give presents! I don’t like it,” she said.

Saunders — accompanied by former Spice Girl Emma Bunton (aka Baby Spice) — had the crowds giggling outside McCartney’s flagship on Bruton Street before she flicked on the colored Santa Claus, reindeer and Merry Christmas lights.

Saunders, who will be starring in three new episodes of “Absolutely Fabulous” in December and January, also regaled the crowds with her musings on p.r. and fashion. Turning to Moss, she said: “Darling, you can’t compete with the fetuses they are throwing down the runway anymore. You can’t cope with the prepubescents they are putting in Prada. You’re going to need some p.r.”