The cancer charity and Max Mara teamed for the annual fall social benefit. 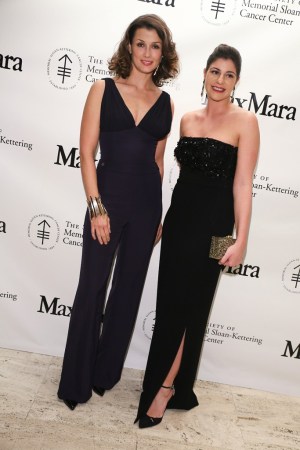 “Ahem. Can everyone sit down? Please?” Shoshanna Gruss, mic in hand, said to the spiffily-dressed crowd milling around the Four Seasons’ Pool Room in New York Wednesday night.

Gruss, in a punchy pink, tastefully body conscious frock, was attempting to corral the nearly 400 well-heeled doyennes gathered at the uptown eatery for the Society of Memorial Sloan-Kettering Cancer Center Fall Party.

Cohosted by Hayley Bloomingdale, Joanna Baker de Neufville, Emilia Fanjul Pfeifler and Cynthia Smith with Max Mara’s Maria Giulia Maramotti serving as an honorary chairman for the evening, the affair raised funds for the hospital’s Pediatric Family Housing Endowment, which supplies overnight visits for patients’ families. It had taken nearly 30 minutes to get guests to drift in from the cocktail room, where most downed wine under the imposing Richard Lippold rod installation suspended over the front bar.

“All right, I’m ready to eat,” Bridget Moynahan said, parking herself at her poolside seat. The candlelit room, with autumnal faux shrubbery flanking the bubbling center pool, was festooned by metallic chains, which, courtesy of the blasting air vents, created a cascading, surprisingly uncheesy waterfall effect.

“I hate to say it but my table is always the fun table,” Maramotti said. The designer chatted with tablemates about her preference of “Harry Potter” over “Twilight,” while Monyahan told the table of her son’s obsession with all things nautical. “We visit the Intrepid weekly,” she said. “He has, like, five versions of the Battleship game.” The actress, who was wearing a black Max Mara jumpsuit, said she felt as comfortable as in her pajamas.

After auctioneer Jamie Niven drummed up support for the cause — raising $540,000 — guests ate wisps of cotton candy and kicked off the dance party. “I hope no one jumps in the pool,” said one bemused partygoer. “It’s not that type of party.”