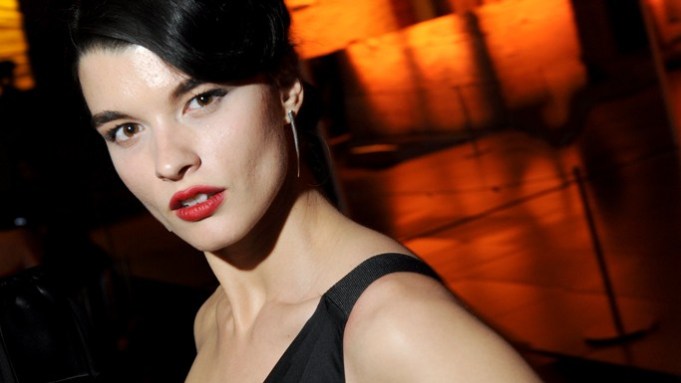 It’s not likely that attendees of the sixth annual Society of Memorial Sloan-Kettering Cancer Center Spring Ball on Monday night in New York were going to mistake the event’s sponsor, Harry Winston. If the sparklers dangling from the ears, necks and wrists of many of the night’s female attendees didn’t do the trick, the decor might have.

“Oh wow,” one taken-aback partygoer said, scanning the hundreds of candles streaming down the main staircase into the The Metropolitan Museum of Art’s Great Hall, where cocktails were being held. The votives spelled out “H” and “W.” “I wonder how long it took to set that up,” another guest wondered between snapping a soon-to-be-Instagrammed iPhone shot.

Notables — including Julia Restoin Roitfeld, Gigi Mortimer, Muffie Potter Aston and Alexandra Lebenthal along with cochairs Shelley Carr, Julia Koch and Karen LeFrak — posed for photographers in front of the display before hitting the bar. Tory Burch tended to a glass of sauvignon blanc near the front of the room while Koch exchanged pleasantries with fellow guests. Husband David bellied up to the bar nearby.

Soon servers wove through the crowd, banging on bronze gongs, indicating it was time for dinner. Guests made their way through the museum’s Egyptian Art galleries, en route to the Sackler Wing. Lauren Remington Platt snickered with Zac Posen, as the two traipsed past the limestone Head of Tutankhamun. Crystal Renn trailed close behind, eyeing the ornate gesso-varnished coffin of Henettawy.

Jamie Tisch chatted with tablemate Burch as the two nestled into their seats underneath the towering silver candelabra stationed at the table’s center. Jamee Gregory, in an Oscar de la Renta peridot silk organza minidress, snaked through the tables looking for her seat, shepherding along husband Peter.

“I didn’t find any ghosts or evil spirits back there,” cracked one guest, who checked out the temple before joining tablemates. “No mummies looking for their wives either.”

Plates of vegetable timbale, a cross section of quinoa, avocado and micro greens topped with a sliver of crispy pancetta, were soon delivered as Dr. Annette Rickel took to the podium. “Since becoming president of the society nearly two years ago, hope has been a key cornerstone of my work. It’s wonderful to have a shared vision with our sponsor,” she began, her Winston cluster drop earrings twinkling under the spotlight. “In addition to their support this evening, we are grateful that the society was selected as a beneficiary of the Harry Winston Hope collection.” Many ladies in the audience glanced down at their own wrists, adorned with the jeweler’s Hope bracelet, a sleek white gold and engraved mother-of-pearl design set with a delicate diamond at its center. Twenty percent of all sales from the bracelet are being donated to The Society of Memorial Sloan-Kettering Cancer Center.

Soon after Rickel’s remarks, jazz vocalist Diana Krall took to the piano, crooning covers from the likes of Nat King Cole and Burt Bacharach for a rapt audience. Hubby Elvis Costello beamed from his seat.

The evening raised $1.5 million, partially due to the cajoling of Sotheby’s Jamie Niven, who took to the stage just before Krall’s performance. “$25,000,” the auctioneer coaxed from the stage, attempting to secure a pledge from the crowd. “That’s two Dior dresses.”