The charity held its annual fund-raiser at the Four Seasons on Wednesday. 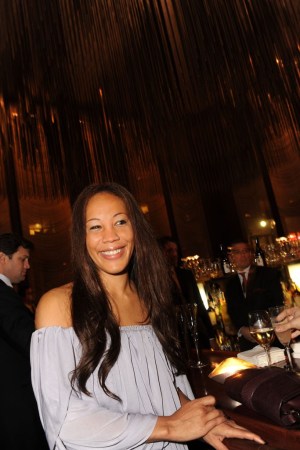 “Our very good friend Ferebee Taube is on the committee and had organized this table but then got this terrible flu,” she said. “So we’re holding down the fort for her.”

As guests moved to the pool room for dinner, Angie Harmon took a break from the action to survey the Indian-themed decor, which included cardboard scabbards and jewels care of the evening’s presenting sponsor, Munnu/The Gem Palace and its jeweler Siddharth Kasliwal.

“I love how he did it as his own, like these go on the turbans,” she said, pointing out a pin-on headpiece. “He’s wonderful.”

The actress has been known to wear her political conservatism on her sleeve, so with election season in full swing, had she picked a horse in the Republican race yet?

“No, not yet,” she said. “I can’t read about things in our country anymore because we’ve become so intolerant of each other. Why am I going to read another story of intolerance, of anger? People are mad. Great. People are mad all the time. Nobody seems to want to try to work towards a common goal. I mean, all that our Congress seems to do is agree to disagree…I don’t want to give up. I don’t want to say that I’m doing that, but I am taking a break.”