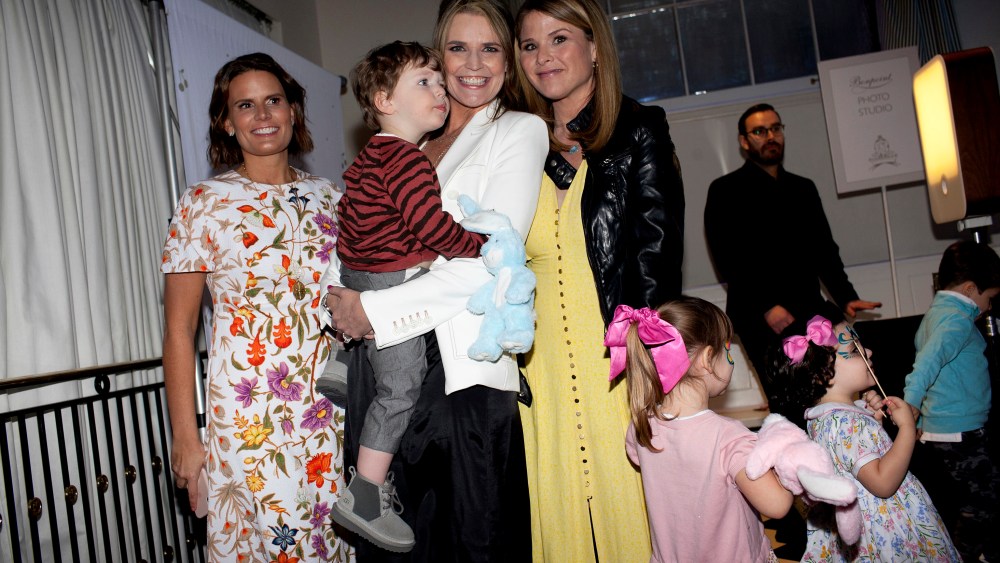 All the usual indicators were in place late Tuesday afternoon. The giant stuffed carrots lining the block along Park Avenue at 63rd Street. A woman, pushing a stroller around the corner, stopping to change from white sneakers into black pumps before stepping through the doors. The pink and blue bunnies flying through the air just inside the doors of the event space at 583 Park Avenue, a veritable vortex, as toddlers zoomed past.

Yes, all the usual indicators were in place that it was the annual child-friendly Bunny Hop hosted by The Society of Memorial Sloan Kettering and Bonpoint.

“The toddlers are all hopped up on sugar,” said Savannah Guthrie, surveying the energy-filled room as she stood next to the packed dance floor holding her young son in her arms. “This is Charlie, and this is his second doughnut.”

Guthrie and Jenna Bush Hager were attending the event for the first time, recruited by a friend to participate as honorary chairs. It wasn’t a hard ask.

“Our kids are so little, and philanthropy is a big word, but caring about others is something they can understand and something you can teach from a young age,” Guthrie said of finding organic opportunities to instill philanthropic values. “And something like this is just part of that.”

“I think it’s more about setting an example and watching how you treat other people. I’m always really careful to say be kind to people, say thank you,” Hager said. “My dad [George W. Bush] did Habitat for Humanity on Saturdays when we were little. And I remember he never was like, ‘You’re coming with me,’ because I think that can turn people away. But I was curious with what he was doing, and I asked to go. And I watched him build a house for somebody who didn’t have one, and the conversations that ensued from that were awesome. But I think it’s more every single day how you treat others, and your children are always watching.”

Well, at the moment they were watching the magician, or the menagerie of animals roaming in the petting zoo.

“Doughnuts,” said event chair Virginia Tomenson of the event’s most popular aspect. “I think most kids are eating donuts for dinner. And face painting usually has a nice lineup.”

It was her fifth year attending the event, and the second year she had taken her three-year-old daughter.

“I love to be able to have something that she can come to with me and see what it’s all about,” Tomenson added. “This is something that I can explain to her that I worked on that we do, this is for the hospital, this is something I give back to.…I think the energy here, too, is such a reflection of the energy that we try to bring as volunteers of the pediatric hospital.”

Dr. Neal Shukla, director of the Pediatric Translational Medicine Program at MSK, attending his first bunny hop, surveyed the room in awe. “A little bit of jealousy, because I never had this cool party when I was a kid: arcade games, a petting zoo and a magician. That’s kind of the trifecta,” he said of his initial reaction to the scene. It’s a trifecta that will allow doctors such as him to fund the big, and often very expensive, ideas needed to cure children.

“The only way we can do what we do to cure children of cancer is by philanthropy. This is huge,” he added. “We absolutely depend on events like this. The Society, they’re amazing.”