The scene outside the Ace Hotel for the magazine's party was a bit chaotic Thursday night. 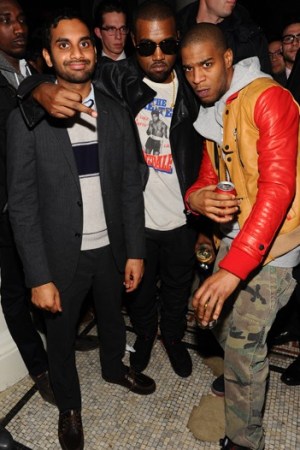 The scene outside the GQ Best New Menswear party-presentation hybrid — farther uptown at the Ace Hotel — was a bit chaotic. A half hour in, the doorman was waving off hotel guests and hopeful partygoers alike with the recommendation of a time-killing drink down the block at the Breslin. On the inside, it was a thoroughly shoulder-to-shoulder-to-shoulder affair, as the crowd, which included Penn Badgley and Tommy Hilfiger, and a few of the fresh faces from MTV’s “Skins,” slowly circulated around the finalists’ presentations. Aziz Ansari joked that he had gotten past the door by telling security he was a designer for OshKosh B’Gosh. The comedian eventually settled up next to the bar with the producer Diplo, who was there to meet Kanye West before a recording session later that night at the Mercer Hotel.

When West did show a little while later, the camera phones came out and the crowd got even cozier.

“I can’t really…no questions,” said West at the sight of a tape recorder. After sidestepping a few other reporters (“I’ve been burnt too many times,” he explained, sunglasses still on), West moved over to the bar to take a shot of Jameson with protégé Kid Cudi before moving on, a magazine spokesman said, to meet Alexander Wang who, the next day, would be awarded GQ’s top prize as Best New Menswear designer.

As the action wound down and the crowd made for the door, Cudi bumped into Jessica Alba.

“Hiiii,” the actress said after an introduction.

“Huge fan,” the rapper replied with a grin.