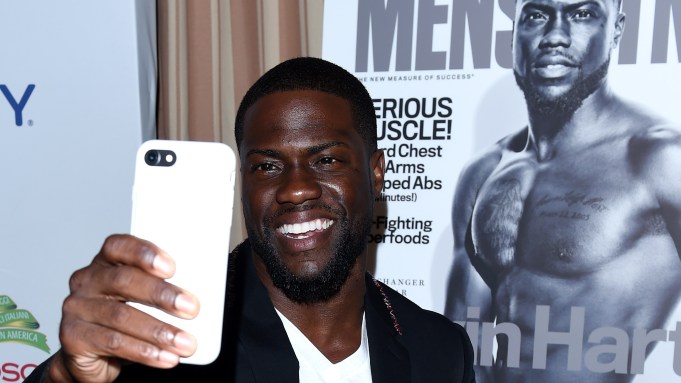 “Where’s my phone?” Kevin Hart asked, flanked by bodyguards. Seconds later, the comedian snapped selfies in front of his new Men’s Fitness cover as a cocktail party got under way at the Sunset Tower Hotel on Monday night in celebration of the magazine’s October “Game Changers” issue.

“Being that this is Men’s Fitness, I said, ‘I’m going to come and be dapper, but I want to hit ’em with an athletic side as well,’” Hart said of his attire. “It’s a Christian Dior suit, but it’s a jogger dress pant. So it’s like I’m ready to work out, but then I’m ready to take a picture, too. I’m giving you the best of both worlds in a chic, casual way.”

Of the role fitness plays in his life, Hart said, “It’s nonstop. I’m a guy who believes in six days a week, sometimes seven.” He continued, “Those training days, those sessions that are early morning put me in the right mental [state] to feel like I’m doing what I’m supposed to do to conquer my day. At the end of the day, I don’t want to help death. The best way to lower the chances of me not being here is to take care of your heart, your body, your soul.”

Aspiring cover faces like Joe Jonas, Jai Courtney, Ryan Guzman, Jesse Metcalfe, Billy Brown, Chord Overstreet and Jonathan Tucker also turned out for the Vince Camuto and Jockey-sponsored soiree where eggs rolls and mac ‘n’ cheese balls served as appetizers for those who were, perhaps, on their “cheat day.”

Former cover face Milo Ventimiglia said he has every reason to indulge these days because of his new hit NBC show “This Is Us.” “It’s funny. They actually told me to stop working out,” he chuckled. Instead he uses the network’s request as an excuse to steal food from craft services. “Playing a dad, it’s definitely like, grab a doughnut on set when you can and eat them all.”

Meanwhile, “Kingdom” actor Jonathan Tucker is already back at the gym as he gears up to return to set in a month. “Being on a project like ‘Kingdom,’ you learn how to train in a way that’s effective,” explained Tucker, who plays a MMA fighter on the DirecTV drama alongside costar Nick Jonas. “It carries over on a spiritual level, on a personal level. It’s about the willpower and the mental discipline.” In addition to “Kingdom’s” upcoming season, the actor will appear on “American Gods” with Gillian Anderson, Dane Cook and Emily Browning in January.

Jesse Metcalfe attended sans fiancé Cara Santana, but that didn’t stop the actor from dishing on pre-wedding fitness plans. “I think the day of my wedding, I’m definitely going to try to be very lean because I want my tux to fit well,” he said. “If your shoulders are too big or your traps are too big or your chest is too big, you look all lumpy, you know?” And Metcalfe insisted Santana wasn’t the only one looking forward to choosing a look for the big day. “I’m going to have a say in what designer designs my tux and what my groomsmen wear.”