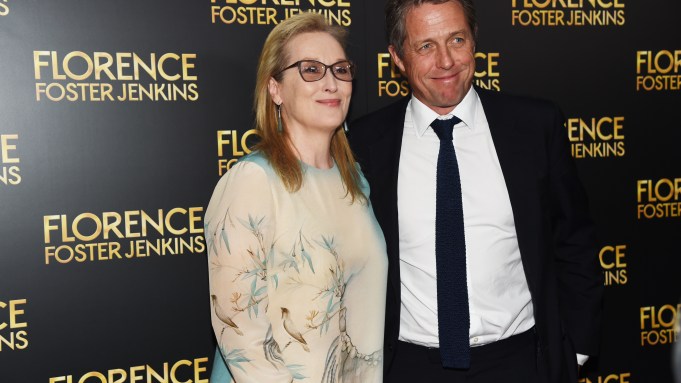 “I think her short sight surprised me — I didn’t know that,” Hugh Grant said of his costar Meryl Streep Tuesday night from the carpet at the premiere of their film “Florence Foster Jenkins.” Though they are both stalwarts of cinema, their screen time in the comedic biopic managed to tease out a few illuminations about each other. “Without her glasses,” Grant continued, “she really can’t see very far in front of her face.”

Grant and Streep were in New York Tuesday to celebrate their latest film, which opens in theaters Friday. The story tells the true-life tale of Florence Foster Jenkins, a New York social figure who dreamed of a singing career despite her less-than-melodic pipes.

“Honestly, zero,” said “The Big Bang Theory” actor Simon Helberg of his prior knowledge of the Jenkins story. Helberg plays pianist Cosmé McMoon, who works with Streep’s Jenkins as her right-hand man. “I think everyone had heard of her that was involved in this, at least something about her. It seemed familiar territory, but no, I hadn’t, and I was just so excited that this existed and that I could be a part of the story.”

While Helberg’s character gets his screen time from the piano bench, Nina Arianda had to learn some rather intricate dance steps for her role as Agnes Stark. “The most challenging thing was definitely the dancing, doing the Lindy Hop,” Arianda said. “I’d never done that before. I have a little bit [of a dance background] but not in the Lindy Hop. It’s like a really extreme version of swing. It’s not really what I studied. I watched every video I could of the Lindy Hop, which was just intimidating. I shouldn’t have done that.”

The film’s screenwriter, Nicholas Martin, said he drafted the story with Streep in mind. “It’s really Meryl’s musicality,” he said of wanting her for the role. “I thought that the film is all about the singing, and getting that right was number one. With Meryl’s interest in music, I thought that she was probably the only person who would really be able to pull it off.”

Grant was a later addition to the script. “I hadn’t thought of Hugh at all,” Martin continued. “[The film’s director] Stephen Frears was sitting around talking about who might play Bayfield, and Stephen just said, ‘I want to send it to Hugh,’ and I sort of thought, OK, and then I said, ‘Well, why do you want to send it to Hugh?’ and he said ‘Oh, because Hugh breaks your heart, doesn’t he?’ And I thought, ‘Yes, he does, he does break your heart!’ So that was that really. And then I started playing the scenes with Hugh in mind, in my head, and then they took on a sort of lightness and quickfooted-ness that I really liked. So I started to just ease some scenes and write more with him in mind, and then Hugh was really on board with the script as well. We spent a lot of time on the scenes, giving them that quickness.”