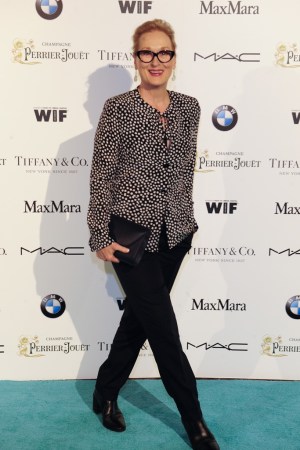 Meryl Streep proved that no matter how many Academy Awards one has, no one is immune to Los Angeles gridlock. “I’m so late,” she said breathlessly, as she walked a rather empty red carpet at Women in Film’s eighth annual pre-Oscar soiree. “It just took forever to get here. The goddamn traffic!”

It was an hour-and-a-half into the three-hour cocktail party, held at West Hollywood’s Hyde Sunset Kitchen + Cocktails, and speeches were already underway inside. Still, the Oscar perennial stopped long enough to discuss her thoughts on the state of gender equality in entertainment.

“Female support is important, but male support is extremely important because they have three-quarters of the power. So that’s who we need on our side. [Women are] always going to back each other up,” she said, adding, “I’m looking forward to seeing some people, if I get in there before it’s over.”

Earlier in the night, Best Actress nominee Rosamund Pike reflected on what it meant to be a multi-tasking mom during Oscar weekend. “My son just threw all his cars in our swimming pool. And I found myself promising to dive in and retrieve them all. There must be about 52,” she laughed. “[So I’ll be up] early tomorrow morning. That’s going to be the morning wake-up call. It’s kind of funny — the discrepancy between this and the image in the pool.”