Met Gala 2016: The Balmain After Party

Kim, Kanye and their tangentially-famous acolytes showed up to the Gilded Lily post-Met. Oh, and Beyonce was there. 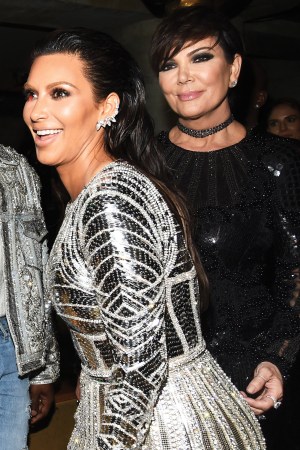 While Boom Boom Room maintains a safe berth – 18 stories, that is – from the plebeians, the only insurance for those attending Olivier Rousteing’s post-Met bash at the Gilded Lily on Monday night was a heavily-manned door.

“It’s just getting started,” a headsetted brand rep told a trio of early arrivals, the concrete rumbling under their feet. It was what seemed to be the first stop of the evening for those eventually on their way to the Boom Boom Room – the two venues’ proximity of 0.3 miles door to door really working to their advantage.

The party didn’t really get started until around midnight, when the entourage emerged. Take a wild guess who. Kim, Kanye, Kris and their tangentially-famous acolytes (e.g. Tyga, Corey Gamble) emerged, the crew’s bling-encrusted wares bursting from the flash bulbs. They nestled into a corner booth with Rousteing and continued to get sprayed with flashes. At least ten photographers encircled the booth, clicking away. The Kanye-heavy playlist seemed to please no one more than Kanye himself, who bobbed to his own music with a self-satisfied smile spread across his face. Beyonce rolled in around 1:30 a.m., well after Kimye had left. She curled up next to Rousteing, her bodyguards blocking any paparazzi from getting a shot of her. Even a discreet attendee who attempted to get an iPhone shot quickly had a flashlight shone in his face. It read like a small coup to Kimye’s unofficial Balmain throne. Who – really – runs this motherf—-er?