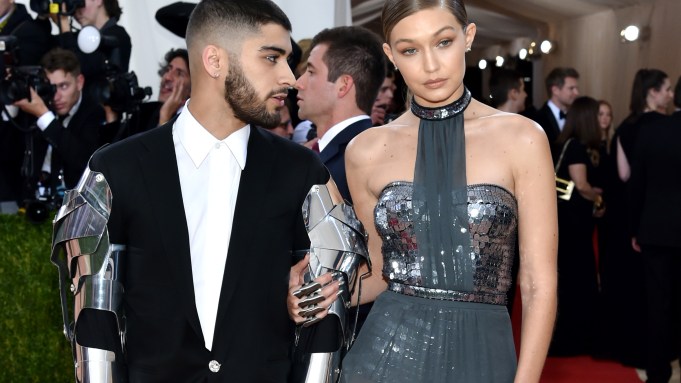 While last year’s big question was when will she arrive — she, of course, being one Mrs. Beyoncé Knowles — this year it was a matter of will she arrive. The megastar’s name was curiously left off the tip sheet distributed to reporters ahead of the red carpet at the Metropolitan Museum of Art’s Costume Institute Gala, leading to speculation Bey wouldn’t show. It made sense, since she’s in the middle of her “Formation” tour, after all. But show she did — bedecked in custom Givenchy — a whopping 50 minutes earlier than she had the last go-round.

Still, Beyoncé was the last of entertainment, fashion and celebrity royalty — and those who think they are — to make her ascent up the museum stairs. Cochair Taylor Swift arrived early, as expected; the now platinum-bobbed and Louis Vuitton-clad singer darting up the steps. Of course, the topic of the evening was technology — Sarah Jessica Parker balked when asked to shimmy for a Boomerang, declaring she had no idea what that meant. Not all in the fashion crowd inherited the techie gene.

“What are wearables?” asked Joseph Altuzarra. “Oh, I do have an Apple watch,” he added. “But I’m not wearing it tonight.”

Dao-Yi Chow was a bit more familiar with the wearable phenomenon, saying he was a big fan of the Fitbit. “We get kind of competitive with it, you can send stats to your friends,” he said. He and Maxwell Osborne dressed pop singer Halsey in a custom DKNY ensemble for her first-ever Met gala. “She’s just very real, which is exactly what fits us,” Chow said. The three were ready to rage. “Oh, we already are,” Chow said. “We’ve been pregaming.”

“I use a lot of technology in my work,” said Erdem Moralioglu. “Digital printing, digital embroidery, lots.”

Futurism influenced some designers in terms of inspiration. “He mentioned ‘Metropolis’ and I’d already been looking into early futuristic things and that’s where his head was as well,” Mackenzie Davis said of her Altuzarra creation, a twinkling silver cape dress, the designer at her side.

Just as Kim, Kanye and Madonna made their way through — not together, it should be noted — a lost Miranda Kerr floated by reporters, looking for the Snapchat press person, who she somehow missed (Kerr is dating the founder, Evan Spiegel). Upon learning she’d missed said Snapper, she lamented, “Oh, my boyfriend’s gonna be so mad!”

Inside, Kendall Jenner was chasing someone.

“Poppy! Poppy!” Jenner shouted, clicking fast down the hallway, Kylie trailing behind her. “Oh, hello beautiful,” the older Delevingne effused once she’d been caught up to.

The Met ball draws a mesclun of celebrities and the greetings are always a great indicator of who’s chummy with whom in Hollywood. “At long last, we have our intimate date at the Met,” Sarah Jessica Parker cracked, air-kissing Barry Diller. Michael Strahan gave Aziz Ansari a headlock (the height differential called for it). Poor Tavi Gevinson couldn’t say hello to anyone. She came with a folded piece of notebook paper with the words “I lost my voice” scrawled on it. “Stop!” Hailee Steinfeld said to the note. “I know,” Gevinson mouthed with a shrug.

Over by the bar, Willow Smith approached Lily-Rose Depp. “Hey bae,” she purred.

Outside, a different Bey was closing out the red carpet — a practical Met Ball tradition at this point. Kim Kardashian and Kanye West had just finished their red carpet ascent. “Wait, wait, wait,” West ordered, putting his arm up to shield his wife from photographers. He then smoothed out her hair. “OK,” he said, backing away. “Perfect.”