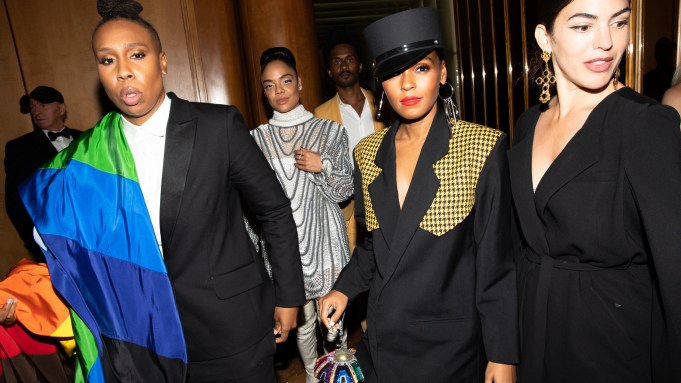 “Madonna was great, I have to say.”

At half-past midnight, Olivier Rousteing was making his way to Top of the Standard, where he was due to pick up hosting duties for the Met Gala’s official after party. The chance was well-deserved, after a day spent prepping and primping for the red carpet procession into the Met Gala for the main event — which, yes, included a performance by Madonna singing “Like a Prayer” (as if some of the barely there dresses and Catholic Church-themed costumes on the red carpet weren’t sacrilegious enough).

“And now it’s time to party,” Rousteing declared to his companion before facing the flashes of photographers lined up inside the venue’s entrance.

The crowd had migrated downtown from The Mark Hotel, where Versace drew the A-listers immediately following the gala for her own bash and the night’s long, long, long after-party circuit. Outside the hotel cameras swarmed for the talent, many of whom had ditched the lengthy trains (and wings, and diadems and halos) they wore to the gala and opted for shorter, edgier and sexier.

After Migos entertained at The Mark, the pack shuttled down to The Boom Boom Room, where they showed no signs of slowing down. The Louis Vuitton crew was camped out in the sunken VIP area, where Emma Stone snapped photos of Ruth Negga and Nicolas Ghesquière in front of the Hudson River-facing windows. While they were still decked in their LV wares, other stars ditched their formal looks for more casual attire — Daniel Kaluuya, for one, had swapped out his Prada suit for a denim jacket, sneakers and backward baseball hat; designers Prabal Gurung and Fernando Garcia (who showed up sans Gala date Nicki Minaj) had also left the black tie behind.

Just shy of 2 a.m., Paris Jackson led Diplo out of the venue and over to Rihanna’s own after party at Up & Down; Jasmine Sanders and Tiffany Haddish followed suit shortly after. But for those who stayed, Madonna’s “Vogue” was queued up — as was Pierpaolo Piccoli and Pedro McDormand Coen, who arrived just as Sanders and Haddish were heading out.

If the look was laid-back at The Standard, the night’s “Sunday best” dress code was enforced at Rihanna’s party, with some turned away for wearing sneakers. As the night wore on (and the guests got more famous), such rules were abandoned, however. Pharrell and Elon Musk (sans Grimes) were early arrivals — by which we mean 1 a.m. — and they mingled about upstairs before things began to swarm with the entrance of Virgil Abloh and his crew of Jaden Smith, Kendall Jenner, Bella Hadid, Hailey Baldwin and her boyfriend Shawn Mendes. Blake Lively and Christian Louboutin stood off to the side, watching it all unfold, as “Love, Simon” stars Nick Robinson and Katherine Langford made a beeline for the exit.

“All that fashion s–t is over,” the DJ screamed into the air. “It’s time to let loose.”

Confession is for another time.