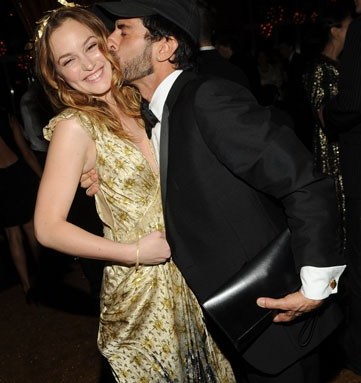 The Metropolitan Museum of Art’s Costume Institute gala is always a tightly run affair that starts precisely on time, if not ahead of schedule. Monday night’s party celebrating the “American Woman: Fashioning a National Identity” exhibit was a little like that save for the fact that 15 minutes before start time there were still men in T-shirts, jeans and Adidas sneakers putting the finishing touches on the decor; Anna Wintour’s co-hostess Oprah Winfrey didn’t make it to the receiving line early enough to greet the first dozen or so guests, and the evening’s after-dinner entertainment, Lady Gaga, took her time taking the stage (after turning every head in the place when she table-hopped during the first course).

Winfrey filled the wait time with a speech about the exhibit, her co-hostess and her newfound idol. “She is more than a pop artist, she is a spiritual force,” Winfrey gushed about Gaga. “Her being all she is makes us want to be more of who we are….The reason we are delayed here is because she and her team were in the back praying before they performed.”

Immediately upon which the clearly less spiritual side of Gaga strutted onstage in a sheer nude body stocking with strategically placed crystals and began thrusting her hips in front of Jennifer Lopez and Gwen Stefani’s table. Her half-naked backup dancers moved provocatively around her during “Alejandro,” “Speechless” and “Bad Romance.” Blake Lively, with boyfriend Penn Badgley by her side, videotaped the act; Diane von Furstenberg and Christopher Bailey enthusiastically danced and sang along, as did models half their age, and Naomi Watts stood behind Liev Schreiber, bopping around and playing with his face.

The moment Gaga’s show ended, guests — including Marion Cotillard, Liv Tyler, Tina Fey, Olympic skier Lindsey Vonn, Demi Moore, Kirsten Dunst, Rachel Weisz, Carey Mulligan and Naomi Campbell — dashed out to the numerous parties after the party. The adults congregated at The Mark and The Carlyle uptown, while a more rowdy crowd, including Lively and Riley Keough, changed from their designer frocks into jeans and Converse and headed to the Standard Hotel’s Boom Boom Room.

There, Tatiana Santo Domingo, Margherita Missoni, Eugenie and Stavros Niarchos kept to themselves in a corner by the piano, while Emma Roberts led Allegra Beck around the room by the hand. Christian Louboutin and Anh Duong cut a rug by one of the booths, Alexander Wang and Joseph Altuzarra danced on top of a table and even Ed Norton moved in time to the music with his date on the dance floor. At the bar, Sienna Miller ended a playful lovers’ quarrel with Jude Law by planting a kiss on him.

As the night turned into early morning, Katy Perry crawled across the floor to Kristen Bell and put her head under her gown. Had she lost something?