The Belgian designers celebrated the end of their fashion house and the start of a new creative chapter that'll include glassblowing and DJing.

“I have to get something to eat before this turns into a proper Belgian party,” bemoaned one guest at the A.F. Vandevorst farewell party on Saturday evening. Nothing maudlin here: there were refreshments, good music and plenty of anecdotes about the duo formed by An Vandevorst and Filip Arickx since their first day at the Royal Academy of Fine Arts in Antwerp.

“At school, they were very different, each with their own temperament,” remembered former schoolmate Walter Van Beirendonck. “I was very surprised that they joined up. It was through love but I didn’t see that coming.” He expressed regret to see the pair move on, although he saw it as “an opportunity to restart your life and do things outside of fashion.”

For many who had met the brand, it was a bittersweet closing of a chapter. Stephen Jones, a longtime collaborator of the brand who produced some of their striking headgear — a 2015 series of condors perched or soaring from heads came to mind — mentioned how he’d miss their distinctive and expressive shows. “It’s funny, when they said to me they’d been in business 22 years, well, I’ve just celebrated my 40th year. So to me, they’re just kids, they’ve barely started,” the milliner said.

“Did you know Filip blows glass,” he then asked. “When I launched my fragrance when Comme des Garçons, I went to the glassblowing factory and I asked to try to blow one. I blew and blew and nothing happened.”

For those who doubted his lung capacity, Arickx had a picture on hand in his iPhone, showing him in goggles with an incandescent ball of semitransparent glass forming. “It’s a material I loved but didn’t know, so I threw myself in this discipline,” he said. 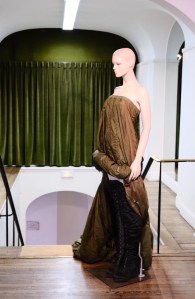 Among the first things that he is producing are glass elements for a new hospital that is being built in Antwerp. “He’s pushing boundaries A.F. style and driving the workshop crazy,” said Daniel Hettmann, a fashion consultant and producer who is close to the couple, who also hinted that Vandevorst might be trying her hand at DJing later in the evening.

Earlier in the day, the upper floor had been something of a shoppable exhibition, where the brand’s nearest and dearest got one last chance to earmark soon-to-be collectibles — provided they weren’t tapped by the Metropolitan Museum, the FIT and Musée Galliera, among others, who came by to make a selection.

“An and Filip wanted to make sure the archive was in good hands,” a team member explained as party guests toured the exhibition one last time. Among the memorable scenes was “The Smallest Traveling Store in the World,” a guerrilla shop that made stops in New York (2012) or Prague (2014), featuring a disquieting old-fashioned hospital room, the motorcycle helmets paired with dresses from fall 2016 or the fur pelt shifts from fall 2005.

Throughout the evening, musical sets were played by friends such as Kim Peers, Daan or Ruben Block from Belgian rock band Trigger Finger. Vandevorst and Arickx were greeting new arrivals such as models Anouck Lepère and Erin Wasson, pressing kisses on cheeks and taking time with everyone. “We still love fashion, the discipline, the possibilities that we have. We still want to share our experience,” Arickx said several times.

Just before 10 p.m., a film curated from pictures and video clips provided by friends of the pair was shown. It had been a surprise for the couple, who discovered this intimate and emotional tribute. As the images faded, there were humid eyes in the room — nothing to do with the ambient rain in town. 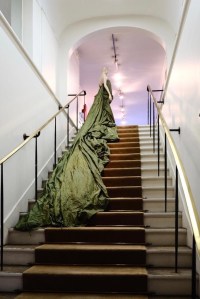