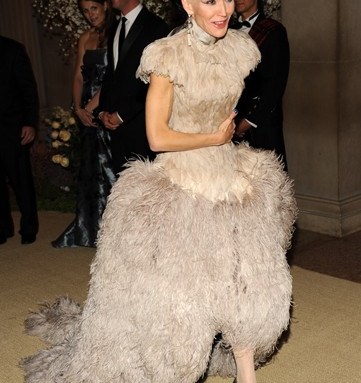 A certain royal affair instantly transformed Alexander McQueen into the most talked-about fashion house, and at Monday’s Met gala honoring the late designer and the spring exhibit of his work at the Costume Institute, it was almost impossible to escape the wedding spirit.

There were some things old (celebrities and models in vintage McQueen), some things new (Naomi Campbell in a current McQueen design), some things borrowed (Elettra Wiedemann in one of her grandmother Ingrid Bergman’s dresses reworked by Prabal Gurung) and something blue (a sense of sadness about the 2010 loss of one of fashion’s great talents).

Karl Lagerfeld was having none of it, though. “I am here for a fashion event, not for a memorial,” he said. “That’s all now over. Hopefully there are no speeches, because life goes on.”

There were speeches, but thankfully for Lagerfeld and the rest of the guests, they were kept succinct and light, with a fair share of references to Friday’s nuptials of Prince William to Catherine Middleton.

“London might have had the royal wedding but we’ve got this, and an invitation to this is actually harder to get,” Mayor Michael Bloomberg remarked. “And we have British royalty here as well — the co-chairs, an actor who won an Academy Award for playing the king and the daughter of a knight.”

“Once I got here, it was easy to feel better about not being invited to the wedding. This is probably the most regal and luminous crowd I have seen since my abdication two months ago,” said Firth, glibly referencing his Oscar-winning turn in “The King’s Speech.”

“I think there are more Brits here tonight than there were at Westminster Abbey,” Stella McCartney observed of the event, which raised more than $10 million for The Costume Institute.

Some who weren’t British gave a nod to the former empire through their choice of dress. Cases in point: Marc Jacobs and Robert Duffy, who came in matching tartan kilts. “Anna [Wintour] asked us to wear something that is a tribute to Lee,” Jacobs explained. “I wear them all the time, but it took some convincing with Robert.”

Other kilt-wearing men — ones hired for the occasion with model looks — dutifully helped Gisele Bündchen into the Temple of Dendur by carrying the train of her McQueen gown.

“Trains, trains, trains,” Gurung sighed. He, like many others, tried to navigate around the barrage of trains that night. Salma Hayek, who was the honorary chair with husband François-Henri Pinault, had a guard who made sure no one stepped on her nude-colored McQueen creation — the last dress the designer had started to work on before his death. Sarah Jessica Parker, too, was careful with the fall 2005 McQueen dress she had borrowed for the occasion. “The stipulation was that I was not to touch it with scissors,” Parker said. “It could not be tucked or tailored. It either had to fit or I had to move on to other choices. It has a very tender sleeve, and the gusset here is hanging on by a thread, like onion paper at this point. I am obsessed with not gesticulating too much or hugging people with my right arm just out of respect.”

British fashion flavor du jour Florence and the Machine was this year’s surprise performer, and the audience, including Kanye West, Beyoncé and Jay-Z, danced along to Florence Welch’s rendition of David Bowie’s “Rebel Rebel.” “This one’s for Alexander,” Welch belted out.

Her performance, and the gala, behind her, Welch joined those unwilling to retire for the evening at Top of the Standard Hotel.