Waris Ahluwalia, Rose McGowan and Cory Kennedy were among those in the crowd for the unveiling. 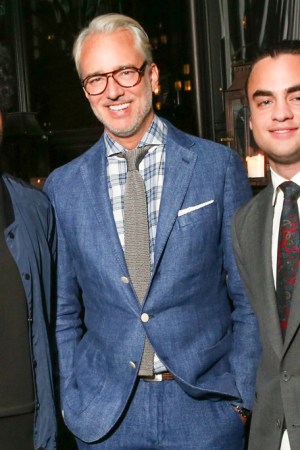 “Relieved is a good word.”

Michael Bastian was at the rooftop terrace of the Gramercy Park Hotel in New York Wednesday night, just a few hours removed from his spring men’s wear show, where he also introduced a capsule women’s collection.

Shortly thereafter, he took a three-hour nap — a disco nap one might call it. He headed straight to the party, hosted by GMC in his honor for appearing in its latest ad campaign, “Precision.” Michael Avedon and the suddenly ubiquitous Twin Shadow are also part of the short film directed by Arnaud Boutin, which screened before dinner was served.

“GMC approached me a couple of months ago to be a part of their campaign for the new Denali,” Bastian said. “They wanted to explore this idea of precision in men’s wear and precision in automobile design and I was super excited to do this with them. I mean, it’s GMC. It’s a big old American company.”

Waris Ahluwalia, Rose McGowan and Cory Kennedy were among those in the crowd for the unveiling.

Bastian said he chose to debut the women’s clothes during New York Fashion Week: Men’s because of his production schedule.

“I produce everything in Italy and the reality is Italian factories close in August so I have to get everything in by the end of July,” he said. “When I showed in September, it was really a [public relations] thing, which is fine. There’s a value to that, but it wasn’t connecting to the business so much. It’s really a tangible amazing thing that we’re doing now.”

The designer boasted he’s already received calls from buyers wanting to come back into the showroom to place orders.

“We’re not going to know until the end of the week how the chips fall,” he said of the inaugural men’s fashion week. “But I feel, from my little perspective, it feels like it’s going well.”