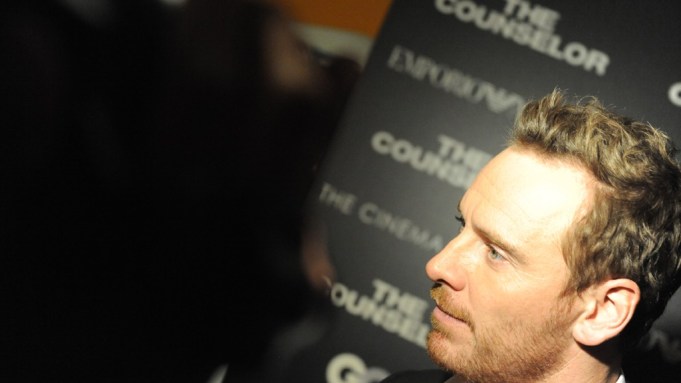 On Wednesday night in the basement bar of the Crosby Street Hotel in New York’s SoHo, John Leguizamo considered his cameo amid an A-list cast in “The Counselor,” which was about to be screened by The Cinema Society and Emporio Armani.

“I thought I was over my head, but I’m in this room with them,” the actor said. “If I’m in [with] the Justice League, I have to be one of the superheroes.”

A poster over Leguizamo’s shoulder displayed the Ridley Scott-directed film’s considerable stars: Brad Pitt, Javier Bardem, Penélope Cruz, Cameron Diaz and, in the title role, German-Irish charmer Michael Fassbender. Though a newer phenomenon than his cast mates, Fassbender has been prestige bait in his short career and his casting was telling.

The film’s script, which details a Texas lawyer’s disastrous entrée in the border drug trade, was written by Cormac McCarthy. The thought of an author so lauded and oft-adapted for the screen writing expressly for it has caused considerable buzz from the project’s onset. Earlier this year, The New Yorker had taken the unusual step of adapting a portion of the screenplay as a short story in its summer fiction issue. On Tuesday, The Wall Street Journal had a reporter on the press line working specifically on a story about the life of the script.

A little while later, Rosie Perez, another of the film’s cameos, came down the red carpet.

“It was just so dangerous and just so on the edge, and it was unapologetic and I loved that,” she said. “You know, in that world it’s very dangerous — but it wasn’t gratuitous, but yet it was. I can’t explain that. It was a page-turner for me and I really liked that. And it didn’t insult my intelligence.”

The room was starting to fill with a familiar New York advance-screening crowd. Zoë Kravitz, Jemima Kirke, Julianna Margulies, Carla Gugino, Joy Behar and Chris Noth were all on hand. Eventually Fassbender himself took to the carpet.

“It was just something totally fresh,” he explained of the work. “There were these long, sort of monologue-type dialogue pieces. It’s a dialogue-heavy piece, which is unusual for film, especially nowadays at least.…It is refreshing, if it’s written well. There’s nothing worse than long dialogue that’s sh-t.”