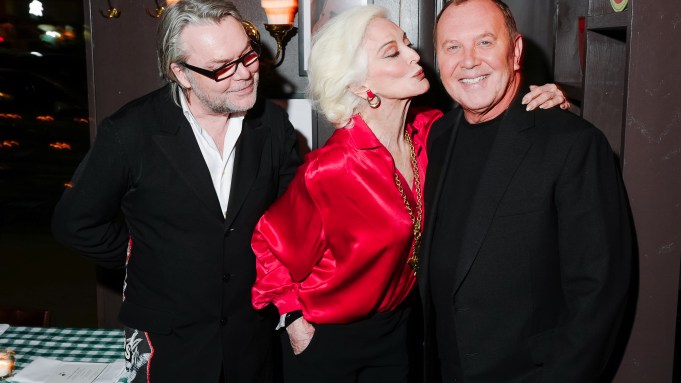 On Valentine’s Day evening, the West Village outpost of J.G. Melon wasn’t a factory of two-top tables but it was still a scene of amity, the intimate dining room packed with Michael Kors’ nearest and dearest friends and supporters.

“Today the whole idea was the show was all about what I love, and then to finish tonight, it’s my neighborhood canteen,” said Kors, who debuted his latest runway collection earlier in the day at Lincoln Center. “For us to be able to come in and turn it into J.G. ‘Downton’ instead, is pretty fun.”

The party was toasting the designer’s collaboration with David Downton; Kors had rendered the fashion illustrator’s sketches into printed dresses. The pair met after Kors sat for a portrait at Claridge’s in London, where Downton is the hotel’s resident illustrator. “I loved it, and I’m terribly difficult looking at pictures of myself,” Kors recalled of the portrait session. “What I love also is he captures people’s essence without it being so photo realistic — it’s really gestural.”

After Kors’ show, Downton may just have a new legion of fans.

“People love them,” the designer said of post-show reaction to the collaborative pieces. “I had a lot of women there who said, ‘Why aren’t I on there? I want to be on there,'” he continued. “Bella Hadid immediately at her fitting said, ‘Where am I? Why aren’t I here?’ I said, ‘Next time.’ Blake Lively said, ‘I wanna be on a bag!’ And who knows, maybe. There’s more collaborations in the future, always.”

As guests sipped Champagne and other libations — it was the last day of New York Fashion Week, after all — before sitting down for burgers and sandwiches, Downton chatted with Carmen Dell’Orefice, seated at one of the three long check-tableclothed dining tables inside the warmly lit venue.

“Honestly, it was a thrill,” Downton said of seeing his illustrations sashay down the runway. “I hadn’t had any preview of what it would be, I didn’t know what would happen, so Bella Hadid walked out wearing [the dress]…it was a thrill.”

His framed illustrations, including the portrait of Kors, were hung all around the room. And speaking of models: how was Kors?

“You know what? He’s such a professional; he’s so himself in every situation, he’s so…the French would say, ‘Bien dans sa peau,’ good in his skin. He sat as he would sit,” Downton said. “And everything began from that.”