The actresses took in the designer’s fall show earlier in the day and were now back to help him launch the new collection. 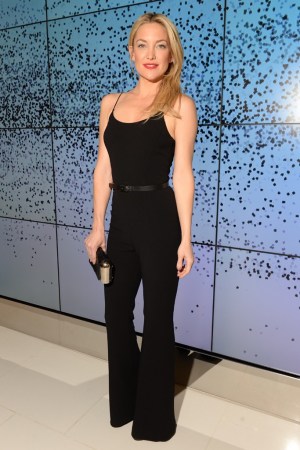 Michael Kors is known to love a grand stage and Wednesday night at his SoHo flagship the spotlight was all on him and his two bosom buddies, Kate Hudson and Allison Williams.

The actresses took in the designer’s fall show earlier in the day and were now back to help him launch — with some fanfare — a new eyewear collection dubbed “Miranda.” Williams’ appearance was particularly striking as it comes in the middle of her father Brian Williams’ very public fall from grace, but, naturally, she steered all talk away from that. Instead, she wanted to talk about something more quotidian: the weather.

“Here’s the thing, I think when you know what to expect and you know how cold it is you plan ahead, so [it’s thinking about] things like minimal amount of time outside,” she said. Soon after she left, Kors walked in beside a beaming Hudson, dressed in a glovelike halter onesie that paid homage to one of Kors’ original preferred blondes — Olivia Newton-John. The designer, never without his aviator sunglasses, remarked on the importance of the accessory.

“The right pair of glasses means you could be getting off a flight that’s 17 hours long and not look your very best, but you put on the glam glasses and suddenly you arrive and you have a movie-star appearance,” he said. Take note, Kate. They’ll soon come in handy on that long flight back to Los Angeles.