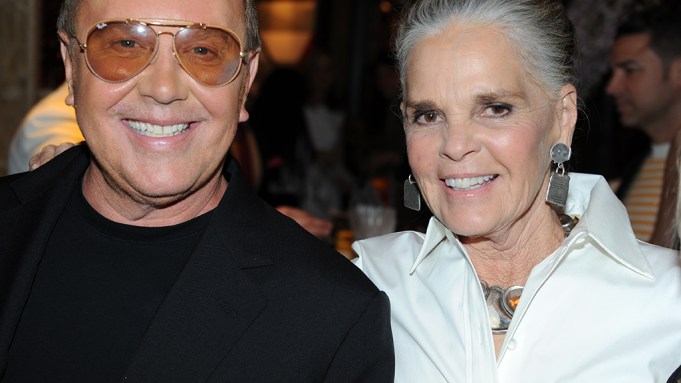 SILVER LININGS: Michael Kors and Donatella Versace shrugged off the black clouds and wet weather on Thursday night, hosting rival parties in two very different London venues to promote their wares. Kors baptized The Ivy, which has a fresh face after closing for refurbishment in January, with a high-energy dinner ahead of the restaurant’s official re-opening in June.

“Dynamo freaked me out,” said a bewildered Kors, who’d just witnessed a few of the London magician’s tricks. “He drew on my palm with a Sharpie — and then transferred the design it to my other hand.” Poppy Delevingne, who was sitting with Kors, watched in wonder as a torn card became whole again. “It’s not normal,” she said of Dynamo’s behavior.

Architecture was a hot topic: Balasz talked about his new hotel project in the Camden Town Hall, a Brutalist building not far from King’s Cross station, while Moralioglu is in the throes of creating his first Mayfair shop, which will open in late summer.

MacGraw, meanwhile, charmed fellow guests with tales of her early film career. “I almost got fired — for everything. I was such a baby, so ignorant, so naïve. But here I am — I’m still breathing,” said the actress who will take the play “Love Letters,” which also stars Ryan O’Neal, on tour in the U.S. this summer. “It’s a freak,” she said of the play. “I haven’t really been acting lately — if you haven’t noticed.”

Earlier that evening, Kors revealed he’d like Daniel Craig to play him in a film of his life — “We both have blond hair!” He’d take Will Ferrell in a pinch “For box office insanity.” Russo, meanwhile, refused to name the actress who could play her in a similar film. “No one gives a s**t about my life,” she said. Hudson, said to ask her again in 30 years.

All three — as well as MacGraw — were talking about fashion and film as  part of a Q&A with Elizabeth Saltzman at the Ham Yard Hotel, part of The Icons of Style curated film series hosted by Kors with Vanity Fair and Fashion & Cinema.

Meanwhile, in the East End, Versace was holding court at the Old Truman Brewery, an industrial space on Brick Lane.

Ahead of a party to launch the latest Versus Versace collection, Versace and the label’s creative director Anthony Vaccarello chatted about how Versus’s latest guise relates to the label’s Nineties roots. “I’m still obsessed with the first collection Donatella did for Versus — it was all black, it could be a collection you’d see this season,” said Vaccarello, whose own collection for the label is filled with asymmetric kilts, punky knit sweaters and body-skimming mini dresses. “It’s something I still have in mind when I’m designing Versus,” he said.

“It was black and minimal,” chimed in Versace. “When I say minimal nobody believes me, but I was minimal then.” Versace also admitted that when she first launched the collection, she had a tough job convincing her late brother Gianni Versace of its direction, which veered away from Versace’s signature opulence. “I was a little bit hiding Versus from Gianni, I would show it to him just when it was finished,” she said. “The first reaction wasn’t good, the first time, but then he liked it,” she said with a grin.

And Versace noted that making the new collection instantly shop-able was particularly important to her. “I have an imagination that all people are like me — they see something and they want it now,” said Versace. “But I think for young people, it’s more and more important — it’s very old fashioned to wait six months for a collection.”

Later, London bands Nothing But Thieves and Zibra both played bone-shuddering sets at the warehouse venue, to an appreciative crowd that numbered Bip Ling, Jamie Winstone, Mary Charteris and Nat and Leah Weller.

Actress Maisie Williams, who plays Arya Stark in “Game of Thrones,” said from the calm of the venue’s rainy roof terrace she was enjoying having “a couple of months off to enjoy the summer.” As to future projects, she said that there are “a lot of scripts that are rumbling around that could possibly get made, or could not, but it’s so lovely to be approached with these things.” And in light of her breakthrough role as the tough, feisty Stark, Williams said she’s on the look out “for strong roles.” “I’ve been really lucky to land an amazing role so young, [and] I want to continue down that path,” she said.