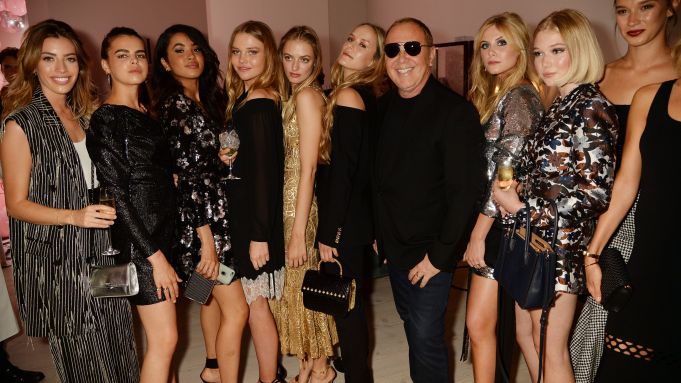 YOUNG AND WORLDLY: Michael Kors turned the exhibition halls of the Saatchi Gallery in London’s Chelsea into a party venue Thursday night, complete with multiple DJs, pink bounce balls and a Who’s Who of British society.

He was in London for the launch of “Tatler’s English Roses,” an exhibition he created with Tatler magazine to showcase the city’s new generation of “It” girls.

“We are living at a time where we see young girls who are so sophisticated and worldly, they love fashion and have their own sense of style at such an early age — I’ve never seen anything like it in my 36 years of designing,” Kors said. “As a designer, it’s exciting to see what these girls can bring into my world and also what they’ll be doing in five years. They put their own spin on what they wear. I think the days of seeing something on the runway and just repeating it, is sort of boring and old fashioned.”

The exhibition features photographs and video footage shot by the photographer David Burton in the English countryside. The subjects — who stand out for their society connections (naturally, since it is Tatler) and social media clout (how times have changed) — include the young British poet Greta Bellamacina, model Bee Bearsdworth, Princess Diana’s niece Lady Kitty Spencer and Ella Richards, the granddaughter of the late model Anita Pallenberg and Keith Richards.

“More than anything, we understand the alchemy that makes an ‘It’ girl, that rare combination of beauty, charisma and timeliness,” said Kate Reardon, Tatler’s editor in chief who was once one of that tribe herself.

Kors, who has worked on similar initiatives with local beauties in China and South Korea, said as the industry becomes more global, he’s been noticing more similarities among the groups of women featured in the exhibitions.

“Because of social media, we can see a group in [South] Korea, or one here in the U.K., and I think we just see this immensely sophisticated worldly group around the world. It’s not just in big cities, it’s the nature of the world today. At 16 you have the sophistication of 30, but you’re still trying new things. It’s a good balance.”

Tapping into the young generation and spotlighting individual style are also in line with Kors’ vision for the future of his brand, as he sets out to streamline and refine his business model, hone the brand’s strategy, keep a tighter rein on distribution and introduce new core products.

He talked about his new line of handbags, the Bancroft, which draws inspiration from vintage luggage. His bags have been re-created in a lighter structure and they’re meant to take women from day to evening. A soon-to-launch customizable smartwatch is another product the designer was eager to discuss: “What I love about this one is that people can put their favorite Instagram photo on their watch phones, which I love — that’s the ultimate individuality.”

Kors said he believes in balance and forward motion “but never a revolution. What we specialize in are the things in your closet that you want to grab on a regular basis, so I never want to bring out products you get tired of quickly. There are women who have been wearing our clothes for more than 20 years, and hopefully, these new styles will become something that you grab onto and wear all time. You always have to move forward.”

As he rethinks the business, he also plans to host more trunk shows around the world in order to meet and spend more time with top customers. He said he’s taking note of the differences in women’s habits globally — especially when it comes to modesty and personal space.

“I have to say it’s not natural for most British women to have a man jump into the changing room. I love to see all the girls who are here wearing the clothes but jumping in the changing room not so much. In America, absolutely.”