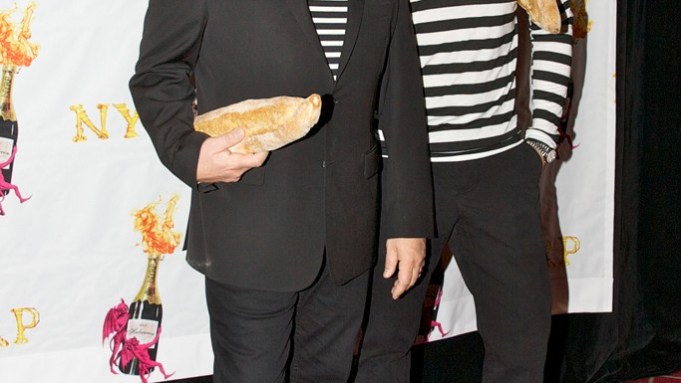 NEW YORK — Unrecognizable in a jet-black wig, mustache, French sailor shirt and neck scarf, Michael Kors proved to be the ultimate judge at Bette Midler’s annual “Hulaween” Party Wednesday night at the Waldorf-Astoria. With a baguette in one hand and a fake cigarette in the other, Kors said, “I am the forbidden Frenchman. I am going to do two things you never see in New York — smoke in public and eat bread. There are women in that [ball]room who have never seen this much carbs.”

“Can you believe I am smoking in public? In New York, red is more forbidden in fashion.”

“En Francaise” was the theme for the 17th-annual Halloween bash, which helped a Coco Chanel-looking Midler raise $1.8 million for the New York Restoration Project. Sizing up the parade of guests en route to dinner, Kors said, “We have a lot of Karls [Lagerfeld.] I knew there would be.”

The designer liked the Ann Curry look-alike with a knife in her back but the American slant clashed with the Francophile theme. That was something he could relate to. “When I was at Celine, they said, ‘You can’t drink Coke in public. It’s too American. I told them, ‘Well, I think everyone knows I am American.’”

Back to the costume contest. The Blackstone Group’s Stephen Schwarzman missed out on prizes as the Devil. And impressive as a stage-worthy French court was, Kors really perked up when a caftan-clad troupe waltzed by. “What are you?” Kors asked the party of 14, only to be told, “We’re Liz Taylor and the was-bands.”

“Oh I get it, you’re Larry [Fortensky] and you’re Richard [Burton] — divine,” he nodded approvingly. “Elizabeth Taylor told me when she was married to John Warner she had to wear tweed.” The Taylor-ites then told Kors their caftans were actually bought at the Christies auction last fall. “I guess I’m lucky because I was bidding against you,” he said. “Just remember, don’t say you’re ‘Liz.’ You’re Elizabeth. She always called herself Elizabeth.”

In a Grace Jones-inspired costume, Douglas Little — who designed the party’s dramatic decor — donned another winning look. Kors said, “We actually saw Grace Jones perform Saturday. It was called her Hurricane Return to Roseland. How strange is that?”

Hurricane Sandy’s flight cancellations stranded Al Gore in Tennessee and Catherine Zeta-Jones and Michael Douglas in Bermuda. Debra Messing arrived Wednesday as Marie Antoinette and Debbie Harry performed in can-can girl attire, but neither walked away with one of the prizewinning wheels of brie.

Before revelers tucked into the Jean-Georges Vongerichten’s three “corps” menu, Midler sang for her supper with Sotheby’s auctioneer Eric Kornfeld and Hugh Hildesley. “Of course, you all want to know who I am — Bella Abzug,” she said, showing off her tweed suit. “No, I am a corpse of Coco Chanel because I knew there would be more Napoleons here tonight than there are Elvises in Las Vegas.”