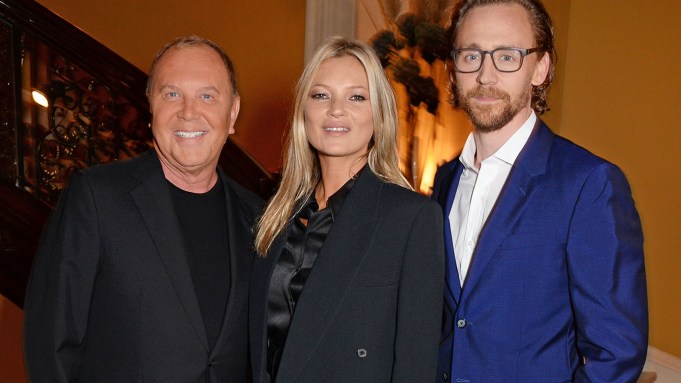 LADIES’ NIGHT: How is it that on a rainy, muggy night in London Michael Kors can still beam rays of sunshine, smiles and St. Tropez-style heat?

There he was on Thursday night, inside Claridge’s dark and crowded Fumoir, surrounded by old friends including Rena Sindi, Lillian von Stauffenberg, Elizabeth Saltzman and Brit actresses and models Ruth Wilson, Cressida Bonas and Malaika Firth, with the Portuguese crooner Mafalda perched on the bar singing a capella, while guests squeezed past one another to trill “Hello, darling,” and peck each other on both cheeks.

Kors’ pal, David Downton, was there, too, talking about the capsule collection of bags the two created with Downton’s dreamy black-and-white portraits of some female archetypes, including the tigress, the society grande dame, the renegade and the tomboy.

“I’m an illustration junkie — and it all started with WWD. I’m also a terrible sewer — but a decent illustrator,” said Kors by way of explaining how the project came about. A Claridge’s guest, Kors got to know Downton, the hotel’s artist-in-residence, when he sat for a portrait, and the accessories idea took off from there.

“What I like about David is that he doesn’t try to get every detail — he gets the mood and the personality. And I had a thought in mind: Women have lots of moods, they play with different characters — and I wanted him to capture — and express — that possibility of those different moods.”

The bags — clutches, totes and a chic lineup of boxy numbers with handles — are on display in the windows of Kors’ Regent Street flagship. Downton said he loved working on the project, which was conceived over a long conversation at Claridge’s. “We sat and talked and bonded over the icons who we love. My idol is Ursula Andress — my life is dedicated to her,” Downton said.

“It’s all about a tan,” Kors laughed when asked about the new deal with Donatella. “Before it happened, we knew each other to say hello — and then we sat down — and we found we are very similar in many ways, there are a lot of synergies between the two of us.”

Asked whether they’d be working closely together, Kors said “not really. We’re all independent children.”

As for the group’s new name, Kors said it’s “representative of the fact that we are now three luxury companies under one roof. Capri is a global luxury destination and has been a regular point on my compass for over 25 years.”