Mario Batali hosted the Can Do awards dinner by himself; Aziz Ansari, Mike Myers and Jim Gaffigan auctioned themselves off. 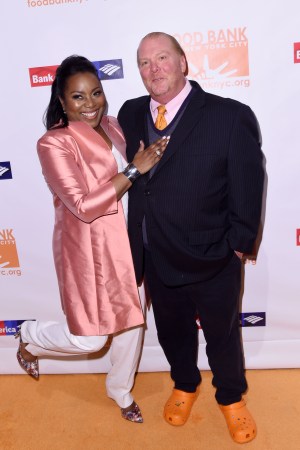 Kelly Ripa wasn’t the only one who got burned by Michael Strahan on Wednesday. Her longtime “Live!” cohost — whose impending departure from the show was announced the day prior — was also leaving Mario Batali high and dry. Strahan was originally scheduled to cohost the Food Bank for New York City Can Do Awards at Cipriani Wall Street with Batali, and his last-minute absence left the chef flying solo.

The dinner is a major fund-raiser for the Food Bank, which aims to end hunger throughout the five boroughs and provides resources and meals to more than 1.5 million New Yorkers. Mike Myers, a friend of Batali’s, made an unexpected arrival and helped carry the weight of the evening. “[Batali] is in the long fantastic tradition of New York citizens that give back to New York,” Myers offered before taking his seat. Designer Brandon Maxwell, who volunteered in soup kitchens with his family growing up, agreed with the sentiment. “You have to do good for the world and support it.”

Strahan did make a brief appearance, albeit a pre-recorded one. “Hey Mario, are you there? I thought you said Cipriani 42nd Street. Did you call me a car? I’m not hopping on a Vespa with you like last time,” he said from a video screen. “I wish I could be there as originally planned for this fantastic evening, I think it’s one of the best evenings in all of New York.”

Batali was taking his absence in stride. “To set the record straight, I have never been on a Vespa with Michael Strahan,” he told the crowd after the clip. “I know he’s sacked plenty of quarterbacks in his time, but I’m not about to become a Michael Strahan statistic. Big week for Strahan and statistics, wouldn’t you say?”

After dinner, Myers, Aziz Ansari and Jim Gaffigan took to the stage to auction themselves off along with a meal cooked by Batali himself, and were throwing in incentives left and right.

“We promise Michael Strahan will be there, too,” Gaffigan pleaded to the crowd. “And Kelly.”

“Very awkward dinner, it will be their first encounter [since the tiff],” Ansari added. “We’re going to ask Mark Consuelos to be the wine person — I didn’t say he was going to do it, we’re going to ask him.”

It was strong bait. The evening raised more than $2.4 million for the Food Bank of New York.