Designers and fashion personalities headed to the rooftop of Milan's Triennale Design Museum for a party hosted by the Italian magazine. 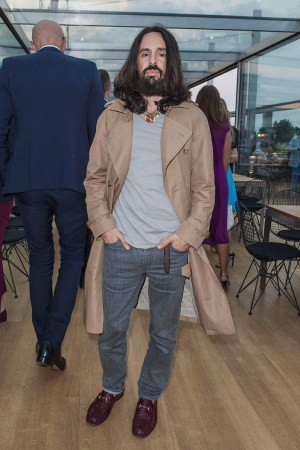 Fresh from his resort show in New York, Gucci creative director Alessandro Michele took a walk through Milan to the city’s Triennale Design Museum and joined those celebrating the new issue of Vogue Italia dedicated to China.

“Strolling through Milan always does me good, I got some fresh air,” said Michele, who arrived with Gucci chief executive officer Marco Bizzarri and sounded satisfied with the brand’s show in New York. “I’m very happy, I liked it, I get really passionate about things,” he added, revealing that he has already finished the new men’s collection to be shown later this month and is working on the women’s lineup to be presented in September.

A new chapter is also beginning at Emilio Pucci after the departure of Peter Dundas and the arrival of Massimo Giorgetti, who will make his debut as creative director of the Florence-based brand by presenting a capsule collection next Wednesday during Pitti Immagine Uomo.

“I’m very happy we chose an Italian designer. I strongly believe it’s important for Italian historic brands to have someone who, being Italian, can really understand the Italian lifestyle and certain ideas we have to bring back,” said Laudomia Pucci, the company’s ceo. “It’s going to be fun, it’s going to be different, but I think it has to be. We have to look at the new generation.”

Dundas, who is the new creative director of Roberto Cavalli, also attended the event, as well as the Florence-based company’s new ceo Renato Semerari. “We will restart in grand style in September — Peter [Dundas] needs time to organize his work and create something well done,” Semerari said, referring to the fact that the brand won’t show a resort collection to the press this season.

“I decided to focus on the main collection and to select a group of outfits from the show which will be delivered in advance,” said the designer, lamenting the difficulties for a small, niche brand to keep the fast pace imposed by the industry.

This doesn’t mean that Colangelo, who is also creative director of Giada, is going to be less busy. “I’m heading to China in a week because there is the opening of the new Giada store in Beijing and then I go to Shenzhen for the presentation of the new collection,” she said.

“Yesterday we started the resort sales campaign and all the clients wrote orders, all of them,” said Ennio Capasa. “Fingers crossed, we are growing, but let’s wait for the end of the campaign, I’m superstitious.”

Others at the party included Andrea Della Valle, Sara Battaglia, Giuseppe Santoni, Luisa Beccaria and Kean Etro with his wife Constanza Cavalli Etro, the founder of the Milan Fashion Film Festival. While the second edition of the festival dedicated to fashion films will take place in September, Cavalli Etro will organize a special screening of Rankin’s new movie, called “X,” on June 21.

“It’s a super sexy movie. It captivates all the five senses and leaves you breathless,” she said, revealing that the photographer and movie director will host a Rankin Live session where people will be able to get a portrait taken by him.