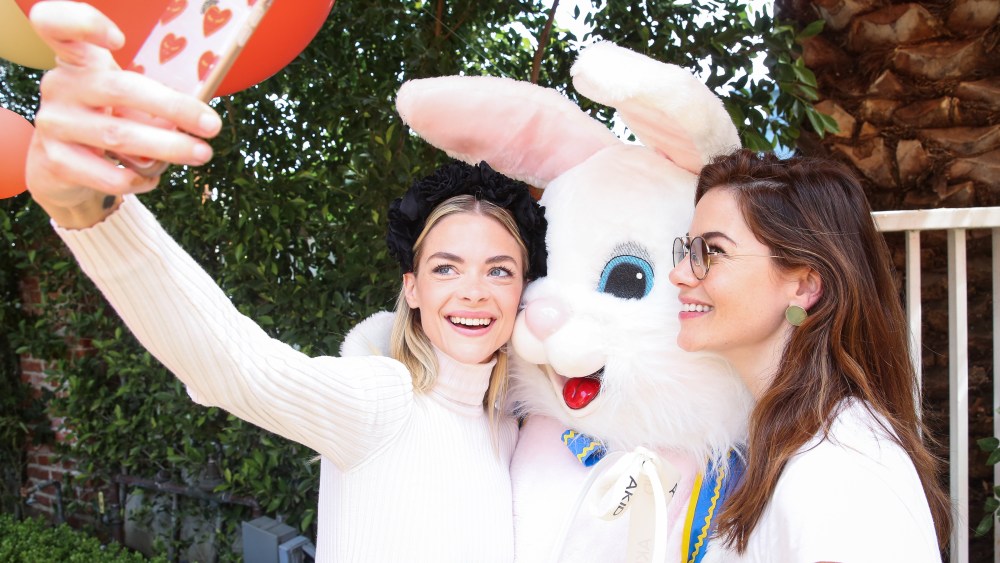 It was as if the families and kids came from hipster central casting on Sunday as Michelle Monaghan, Gavin Rossdale, Jaime King and more industry types enjoyed an early Easter Sunday during kids’ label AKID Brand’s 2nd annual egg hunt at the Lombardi House in Hollywood. The chic afternoon featured a petting zoo, a 100-foot slide, airbrush face painting, balloon animals, an Easter bunny, a Sugarfina candy bar, cookie decorating and, of course, the highly anticipated egg (and candy) hunt.

After snacking on bunny-shaped PB&J sandwiches, Rossdale and his sons, Kingston and Apollo, were among the first in line with Easter baskets. “It’s the trendiest party in L.A. and everyone has got chocolate on their feet,” Rossdale said, revealing that his shoes were indeed covered in melted chocolate. “They made them wait so long, the sun beat down on the Easter eggs. It looks like a dog park but with chocolate. I’m trying to wipe as I speak.” Did he pick up any candy himself? “Only on my feet.” As his sons sat on the ground eating what they’d gathered, Rossdale noted, “My three-year-old is having the time of his life.”

Songs from “The Lion King,” “Beauty and the Beast” and “Annie” played, as Charlize Theron’s children decorated cookies with their grandmother. Elsewhere, King picked up a couple pairs of AKID shoes. “They’re really cute,” she said, selecting two pairs of red and green camo boots for her sons, Leo Thames and James Knight, respectively. “They have worn AKID ever since they were born,” she continued, adding that the brand allows kids “to express who they really are.”

Baby2Baby benefited from the afternoon’s shoe drive, in which guests were asked to bring gently worn shoes in exchange for a new pair from AKID. The children’s brand also agreed to match the group’s donations.

“Anything that supports Baby2Baby and kids in Los Angeles — I am there,” said Monaghan, who attended with her son Tommy and daughter Willow. “Once you have children, you realize how many things you need and also how easy it is to pay all these items forward, rather than having to buy things that are new.” She added, “As any parent knows, kids go through shoes lickety split. Instead of letting things sit in your closet, do some spring cleaning and donate it forward.”

As for actual Easter plans next week, Monaghan said she was headed to Iowa to visit her family. “We’ll be having an egg hunt there as well,” she said. Meanwhile, King said her husband would be out of town. “He’s going to try and make it back,” she said. “But I think we might go over to Jessica Alba’s house, auntie’s house — we’re trying to spread it around.”

Others at the event included Tara Swennen, Emily Current, Jerry Lorenzo, Taylor Jacobson and Caley Rinker. While most left with new shoes, there was one thing Monaghan hoped wouldn’t be accompanying her. “My daughter is itching to play with the rabbits,” she said. “I won’t be surprised if one gets snuck home.”