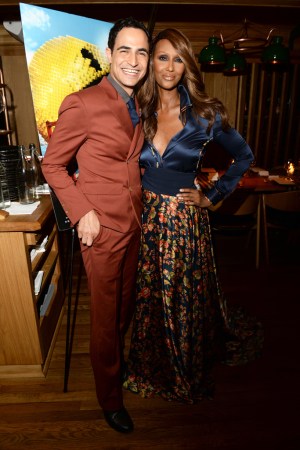 “The plot of the movie is — and stay with me here…”

On Monday night, Jane Krakowski was attempting to explain the plot of her latest film, the admittedly high-concept “Pixels.” She eventually got around to it, but perhaps it’s best to stick with the description on IMDb: “When aliens misinterpret video feeds of classic arcade games as a declaration of war, they attack the Earth in the form of the video games.” All right then.

With Adam Sandler and Kevin James as its above-the-title stars, the live action-animated film is positioned as catnip for teenage boys, those for whom “The Lego Movie” was not enough. But at the dinner hosted by Zac Posen and Yahoo Style, it was all about the ladies — Krakowski and costar Michelle Monaghan and Martha Stewart, who makes a cameo as herself and selected the dinner, plus a host of additional femme fatales, including Iman, June Ambrose, Liu Wen and Lena Hall.

Sequestered in the basement of Midtown’s Upland restaurant, the conversation inevitably turned to fashion, with a little video game talk thrown in for good measure.

“I was a big Nintendo kid,” Posen said. “But my mom was even better than I was. At the end of the day she would always end up playing with my friends.”

Monaghan skewed a bit more old school with her video game preferences. “Pac-Man was my first introduction,” she said. “My personal favorite is an Atari game called Pole Position. Sister, it is so much fun. You basically, your joystick is a racing car — it’s so simple. I wasted a lot of quarters on that.”

Pre-dessert, the actress joined seatmate Heather Parry, head of film at Sandler’s Happy Madison Productions and an executive producer on the movie, to give the requisite, if a bit late, toast.

“This idea of tonight came about because I work at a frat house,” Parry said. “I love my brothers, but they are all going to New Hampshire to see NASCAR. I thought, ‘I have all my girls in New York…’ I have to say, this is the best Happy Madison has ever looked.”

A chorus of whoops erupted among the mostly Posen-attired group. Take that, Sandler.