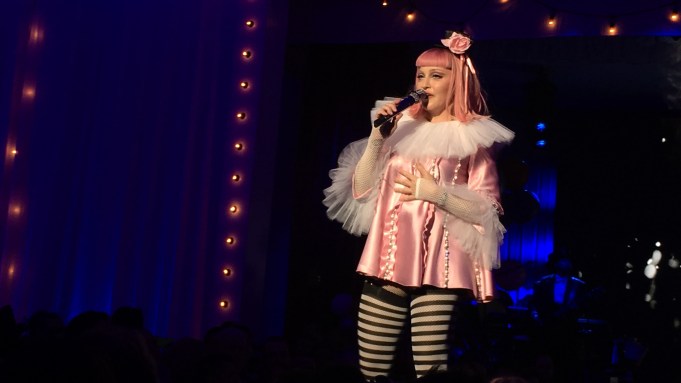 “When Madonna calls, you answer,” said Chris Rock, who made his inaugural Art Basel journey just for the Material Girl and her Friday night fundraiser thrown in partnership with Bvlgari, for her Raising Malawi charity. He wasn’t the only one to show up with bells on for her second-ever benefit performance: ex-husband Sean Penn, Leonardo DiCaprio, Dave Chappelle, Ariana Grande, Russell Simmons, Alex Rodriguez, RZA, Courtney Love, Tracey Emin, Karolina Kurkova, Adriana Lima, Brett Ratner, Guy Oseary, Alexander von Fürstenberg, Jeremy Scott, Len Blavatnik, Alan Faena, Ximena Caminos, George Lindemann, Mayor of Miami Beach Philip Levine and master of ceremonies James Corden crammed like sardines into the makeshift circus tent. Not to mention, fans flew in from as far as Australia, and to pay $5,000 a ticket.

“I dipped into my savings to buy a table,” said Jenny Crooks, a Brit who followed Madonna’s last tour to 42 cities. “It’s for a good cause, and I can always work more.”

At the auction preview for Madonna’s artworks and memorabilia, which included Scott’s Swarovski crystal flapper dress from her Rebel Heart tour and Herb Ritts’ photographs of her wedding to Penn, Diana Widmaier Picasso hoped the singer would perform a hit from her Erotica album (large-scale photos from her Sex book were also up for sale).

“I’m doing an exhibit called “Desire” for Basel, so I’m hoping she’ll at least sing something in a bed,” Picasso said.

Instead, Madonna conceived a clown theme, a commentary on the current political state, thanking Victor & Rolf for designing the sexiest clown costume ever. Always one to stand on a soapbox, Madonna then dedicated a cover of “Toxic” to Donald Trump in a roundabout way. The mother of four shimmied, twerked, tap-danced and crawled on her knees to fuel bidding, starting with Bvlgari’s Serpenti 18-karat white gold and diamond pavé necklace, which fetched $180,000 from von Fürstenberg. With hardly a morsel served at dinner — an intentional ruse to give more money to the cause, according to her — the long auction became an exercise in torture for many famished attendees, some of whom broke down and brought in pizzas from a food truck. Too bad no one thought of auctioning off the pies.

“Only Madonna could keep 400 people for six hours without eating and still everyone have a great time,” said Dorian Grinspan at the after party presented by Bvlgari for its B.zero1 Design Legend banded, pink and white gold ring by the late Zaha Hadid, which premieres in March.

And then just like in her old days here, Madonna and friends arrived in the wee hours to watch the sunrise over the ocean from Faena Hotel’s penthouse balcony.