The documentary screened on Thursday night at the Museum of Modern Art in New York. 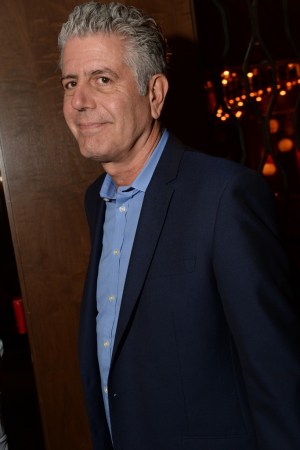 After the box-office disaster that was “The Love Guru,” Mike Myers took a hiatus from the big screen — got married, had two kids — but now he’s returned, this time behind the camera with his first directorial effort, “Supermensch: The Legend of Shep Gordon,” which premiered Thursday night at the Museum of Modern Art in New York.

Though the title (plus the Myers tie-in) would lead one to believe it’s a comedy, the film is a documentary chronicling Gordon’s storied career in music management, one rife with colorful tales. Case in point: After graduating college and moving to Los Angeles, Gordon encountered Janis Joplin and Jimi Hendrix midcoitus at the Landmark Hotel. The next day, Hendrix suggested that he become a music manager — and linked him up with Alice Cooper, who became the first of his many clients.

“This film has been in me for 20 years — I have 10 other films that have been in me. Finally this beautiful man allowed me to make a story about him a couple years ago,” said Myers, gesturing toward the subject of his film, who was beaming beside to him. “He kept texting me, ‘Are we really going to do a movie? Is this ego?’ I said, ‘No dude, this is legacy. You’re responsible for so much, you’re the Lamaze birth coach of so much culture that we all love.’”

So why did Gordon agree to the documentary after so many years?

“I started to feel a little bit sorry for myself — I wasn’t getting invited to celebrity golf tournaments,” Gordon said as guests — Olivia Wilde and Jason Sudeikis, Zac Posen, Michael Stipe, Anthony Bourdain, Elvis Costello and Donna Karan — filed into the theater. “I called up Mike and said this is going to sound really trite, but I really want to get invited to celebrity golf tournaments, maybe we should do this.”