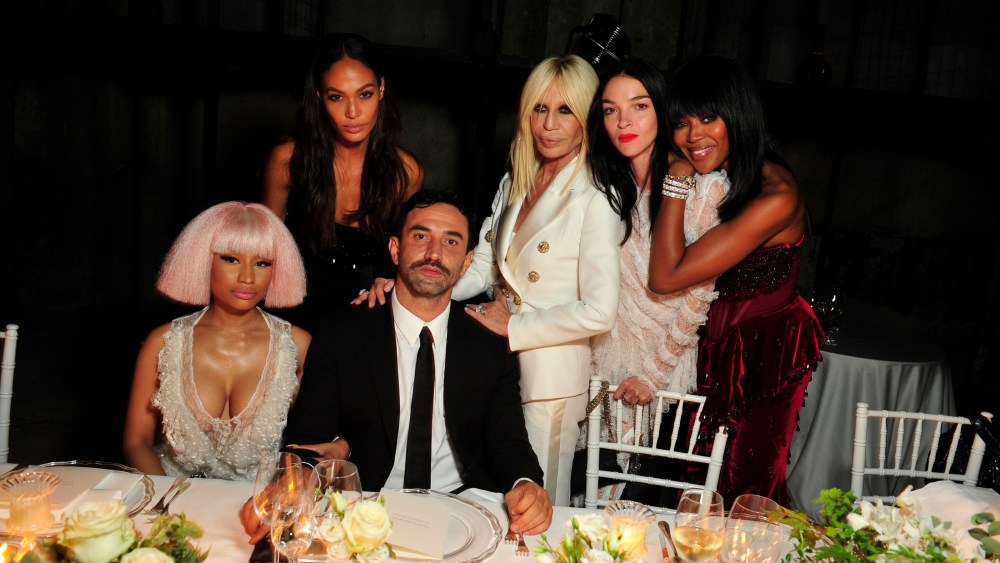 MILAN — Late on Friday night, at the invitation of Givenchy and Riccardo Tisci, the fashion pack trekked to a remote, industrial part of Milan that many locals had never visited.

They were rewarded with one of the most theatrical parties the Italian fashion capital has ever seen, populated with barking Rottweilers, basketball players, voguing dancers, shirtless barmen — and one very curvaceous rapper.

“It’s gonna be full-on Nicki Minaj,” Tisci, dressed in a suit and tie, promised around 1 a.m. as well-wishers — including his mother and most of his eight sisters — swarmed around him.

At a vast, abandoned crystal factory, Tisci had laid out an at-times cryptic career retrospective: the angry dogs referencing one of the most popular print motifs in his first decade at Givenchy; the snowy pathway — gosh knows what.

Spelled out in lights, the phrase “I believe in the power of love” illuminated vignettes staged around wrecked cars. All manner of alterna-types – punk and glam rockers, man brides and Latex lovers – posed and writhed on the vehicles, reminding the crowd that Tisci draws on dark and daring source material for his fashions.

The Champagne and Belvedere poured freely — and antics ensued. Michelle Rodriguez tried her luck on the basketball court but had to be hoisted by a few players to dunk.

“The balls were flat, I tell you,” she pleaded later in the VIP area, elevated for clear sight lines of Minaj and her two backup dancers in nearly nude bodysuits.

The rapper congratulated the designer on his 10-year milestone, and wished him another decade of success. Then Seth Troxler hit the decks and the thick crowd got moving.

“I like this! Acrobats, dancers, people in the windows. I think it’s kind of amazing. I think I have never seen anything like this before,” enthused Marjorie Gubelmann. “And in New York, we have seen everything. I like when people raise the bar trying to do things people have never seen before. Everything is young and cool; everybody is having fun.”

Model Mariacarla Boscono, Tisci’s muse, has been at the designer’s side through thick and thin, but said she always knew he was destined for greatness.

“He was breaking my balls so much he could have not become a star. Sometimes people think this is not real. I feel like we have been both very lucky, this is the real story of our life,” she said.

Ditto Naomi Campbell: “I’m here for Riccardo,” said the model, who earlier in the evening attended the Versace show, arriving on Tisci’s arm.

The guest list was as eclectic as the costumed extras, with VIPs in attendance including Roisin Murphy, Amanda Lear, Lapo Elkann and bodacious Ilona Staller, better known by her stage name: Cicciolina.