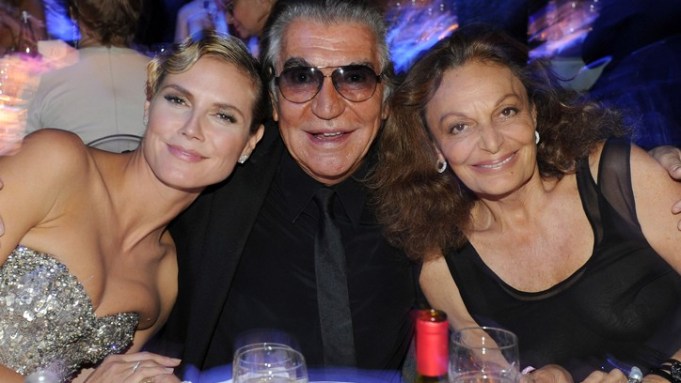 MILAN — It was a slightly sleepy crowd that came out for amfAR’s second Milan event at art space La Permanente on Tuesday evening—the tail end of Fashion Week here.

Roberto Cavalli said he snuck in some naptime after his show earlier in the day. “I feel light and relaxed now,” he said. And he should, with his big 40th anniversary celebratory bash in Paris coming up Wednesday night.

“My adrenaline level is really low now that the show is over,” sighed Margherita Missoni.

Photographers on the red carpet couldn’t have enough of Heidi Klum, co-chair of the event. Wearing a Cavalli design, Klum said she is no stranger to Italy, often spending her holidays here. “This summer, we worked our way down the coastline for two weeks, visiting Amalfi, Positano, Stromboli,” said Klum. “It’s so beautiful to see the country from the boat, it’s such a luxury. And there’s more freedom, compared to a hotel, where you don’t move as much.”

A special performance by “Glee” actor Cheyenne Jackson kicked off the auction. Cavalli lost out on a signed Bert Stern photograph of Marilyn Monroe that went for 42,000 euros (or about $56,000), whilst Diego Della Valle failed to snag a portrait session with Italian photographer Giovanni Gastel, selling for 50,000 euros (or around $67,000.) Other lots included a Louis Vuitton Vanity Case designed by Sharon Stone.

Diane Von Furstenberg, in a sheer black top, was thrilled — and surprised — that her customized Mini Cooper by DVF raised 80,000 euros (around $108,000.) In her enthusiasm, the designer offered to test-drive the car with the winning bidder. “I’ll drive with you,” Von Furstenberg cried out from the podium to the competing bidders. “When I was younger I always wanted a Mini,” she later confessed.

“I just wrapped up “Ameriqua” with Bobby F Kennedy III,” said Bahamian actress Fox, who stars alongside Alec Baldwin and Glenn Close. Fox has been spending some time in Italy because she said the movie is “about Kennedy attending University in Bologna.”

Felberbaum, on the other hand, has different aspirations altogether. “I’d love a role in a silent movie,” she confessed.