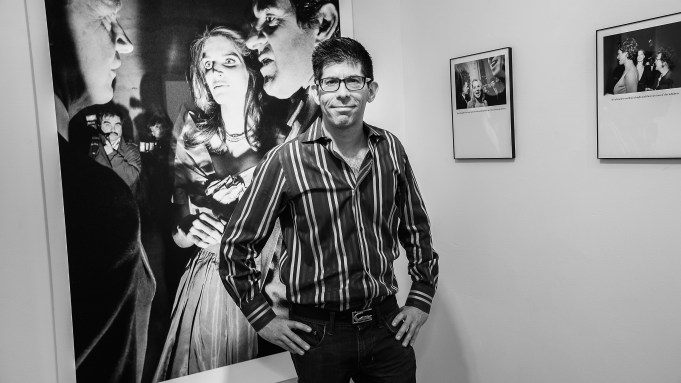 “I want Naomi Campbell to throw a phone at me, you know what I mean?” Miles Ladin said. He was standing next to a photograph he took of Christy Turlington at the Metropolitan Museum of Art’s Costume Institute Gala in 1995. The photograph is one of 16 currently on show at Station Independent Projects as part of the exhibition for Ladin’s artist’s book, “Supermodels at the End of Time.”

“I want Linda Evangelista to say, ‘I won’t get out of bed for less than blah, blah, blah,’” Ladin continued. “Yes, I was critical of that behavior. It’s gross in a certain way, but it reflects the society and they at least had personalities. My pictures are not flattering to a lot of them, I have to say. But they’re humorous.”

“Supermodels at the End of Time” combines photographs Ladin took mainly in the Nineties and early Aughts with text from Bret Easton Ellis’ 1998 novel “Glamorama.” Ladin chose the specific passages simply by reading the novel a few times over and taking notes. The title of Ladin’s book refers to 9/11 as the “end of time,” but it’s in no way about the end of time itself. Like most of Ladin’s photographs, the book is a commentary — and a comedy.

“The book is a dark humor,” Ladin said. “I’m not referring to the specifics of catastrophes, but it alludes to a different time. Even in models, it wasn’t the era of Instagramming the Jenners and Gigi Hadid and people groping people in Paris and things like that.”

Ladin’s photographs are intimate and candid. They display a side of the fashion world outsiders rarely see anymore: models and designers at ease, unconcerned about who’s watching them. Ladin credits The New York Times, W Magazine and WWD with giving him enough “creative freedom” to be able to capture these images at the time that he did. They’re honest, playful and absurd.

“There’s humor in all of these pictures, but there’s a difficulty to them I think,” Ladin said of the images. “I don’t think they run bad pictures of Gigi Hadid. Maybe they should, I don’t know.”

“Supermodels at the End of Time” is on view now through Oct. 30.