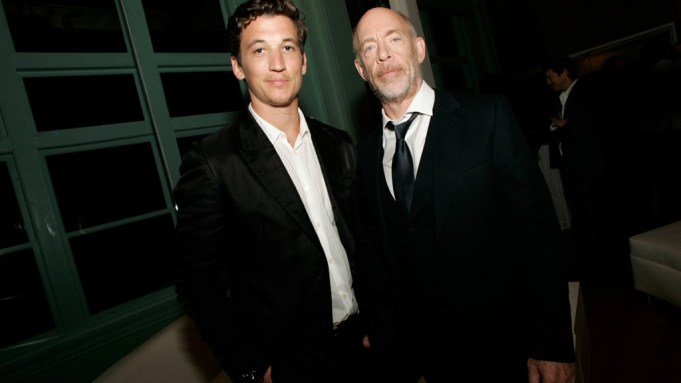 Miles Teller — America’s next leading man. That seems to be the undisputed truth if one asks any Hollywood insider and the crowd gathered Monday night in Manhattan at The Cinema Society and Brooks Brothers cohosted screening of Teller’s latest film “Whiplash.” The film, which had a splash at the Sundance Film Festival, also screened Sunday to much acclaim as part of the main slate of the New York Film Festival.

Teller’s costar, veteran actor J.K. Simmons, was the first to air the sentiment, though he swiftly followed up by saying he doesn’t give the endorsement lightly. “I think this generation is the overpraised generation,” he said. “It really felt much more like a peer relationship, like I was working with a real pro, who had been around and knew how to pass the ball, and how to shoot.”

The 27-year-old Teller has only really been on the public’s radar recently, since his breakout performance in “The Spectacular Now” last year opposite Shailene Woodley. He’s followed it up with a pair of hook-up comedies — “That Awkward Moment” and “Two Night Stand” — and teen dystopian box-office hit “Divergent.” In the gritty, low-budget drama “Whiplash,” Teller shifts from relatively two-dimensional, supporting characters to a complex and tortured lead. He plays Andrew Neyman, a young jazz drummer studying at the best music conservatory in the country who becomes obsessively consumed with his musical achievements. Simmons plays his teacher.

Unlike his leading man counterparts of the freakishly handsome variety, Teller’s appeal has been in an affable, aw-shucks kind of way. With “Whiplash,” he finally gets to play a grown man worthy of his artistic ambitions.

“I want to move past that adolescent stuff and just take on more masculine, kind of leading-man stuff,” said Teller. “It was nice to play a character that really only focused on one thing — I didn’t have to worry about the girl, I didn’t have to worry about my buddies,” Teller continued. “Literally, it was just: Become the best drummer of all time.”

Fittingly, the after party — attended by Zac Posen, Nora Zehetner, Zosia Mamet, Zach Booth and Alysia Reiner — ­was held in the new Resnick Education Wing at Carnegie Hall. “Give it a year, and he’ll be playing a superhero,” remarked one guest at the party, not realizing that the young actor already has; next year, Teller returns to the franchise world when he portrays Marvel leading man Mr. Fantastic.