Editor-in-Chief Stefano Tonchi chose Cyrus as co-host to not “show preference” to a particular nominee during Golden Globes week. 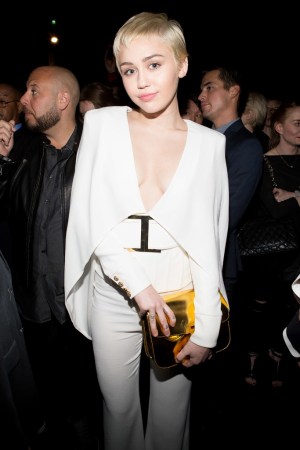 Miley Cyrus has done many things to court attention through the years, but on Friday night, she created a stir merely by showing up late to co-host W Magazine’s Shooting Stars exhibit at the Old May Company Building in Los Angeles. Even Jordana Brewster, who was “tastefully” flashing her midriff in Vera Wang, couldn’t help but get swept up in Miley mania. “I heard she was coming…The way she reinvents herself constantly is really interesting to watch,” noted the actress.

But it took an hour-and-a-half of waiting — while the crowd ordered specialty drinks, including one called Shooting Star and Siren, and grooved to beats spun by Dev Hynes a.k.a. Blood Orange — for one of the magazine’s best-selling cover stars (who fittingly fronted its social media issue) to show up. When she did, Cyrus was swarmed by hordes of attendees begging for selfies and snapping cellphone photos, a sight more common outside Hollywood bashes than within. Decked out in a white Balmain ensemble with a plunging neckline, the pixie-haired pop star posed alongside her photo at the exhibition, split into two themes: archival narrative fashion stories and transformative portraiture from the pages of W. Embodying the latter, she sported longer blonde locks and bleached brows in the photo, giving her a Kirsty Hume-like look.  In a room full of images of celebrities including George Clooney in polka dots (which Rachel Zoe deemed “really cool”) and Margot Robbie submerged underwater (Jason Wu’s admittedly biased pick for best photo, as the actress donned Hugo Boss in the Bill Viola shot), Cyrus exhibited self-love when asked for her favorite. “Which one do you think?” she sassed.

Editor-in-Chief Stefano Tonchi, who chose Cyrus as co-host to not “show preference” to a particular nominee during Golden Globes week, curated the event. “It’s becoming more and more difficult to have your point of view and to create something that is original to your publication, so that was really the idea — to show what we do with celebrities, what they do for us,” he said.  Video projection mimicked the turning of the magazine’s pages to bring to life the stories from photographers including Mario Sorrenti, Tim Walker and Steven Klein, whose famous Brangelina playing-house shoot was blown up for all to see. “That’s one of the most classic Steven Klein stories…It’s about bringing that beautiful kind of history to a new generation and continuing that heritage,” Tonchi said.

Said 18 year-old Hailee Steinfeld as she took in the images, “I kind of want them for my room!”