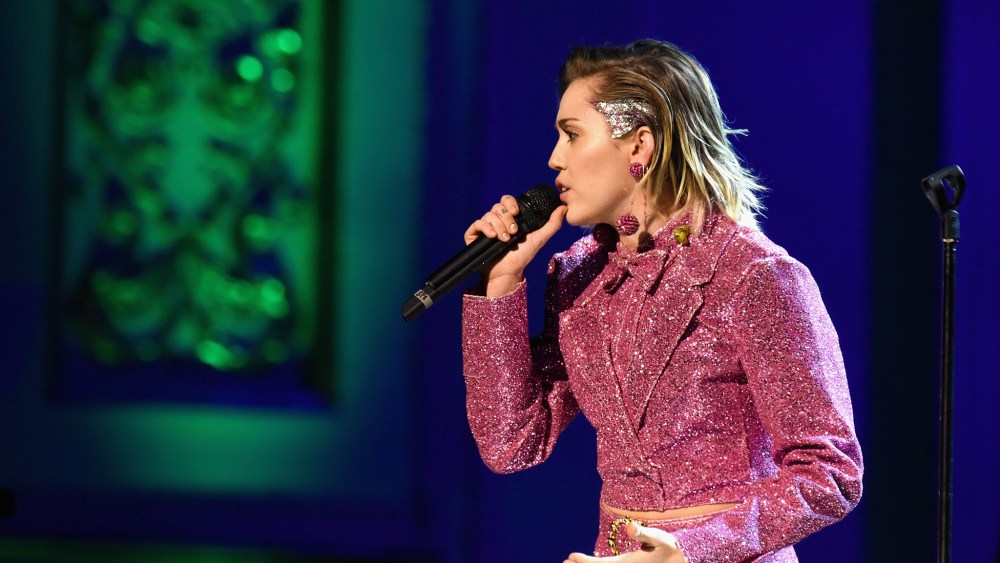 NEW YORK — Guests inching their way through security at Tuesday night’s “It Always Seems Impossible Until It Is Done” event at Carnegie Hill could be forgiven for thinking the gathering had already lived up to its billing.

Once past the metal detectors, NYPD officers and Secret Service agents, attendees were in for a night that included performances by Miley Cyrus, Jessie J, Hozier, Bono and The Edge. Interestingly, they and the evening’s presenters — Bill Clinton, Stephen Colbert and Vice President Joseph Biden — provided most of the commentary. Honorees Michael Bloomberg, Bill and Melinda Gates, Mo Ibrahim and Ngozi Okonjo-Iweala merely waved their thanks as a sign of acceptance from the mezzanine. In honor of World AIDS Day, all were assembled to celebrate 10 years of The One Campaign and Red, two AIDS-fighting groups cofounded by Bono. Host Trevor Noah noted that by the end of U2’s current tour, the group will have generated nearly $20 million to the Global Fund — “That’s more than some countries.”

In a bright pink sequined pantsuit and starry cowboy boots, Cyrus was on her best behavior, collected when talking about the fight against AIDS and offhandedly funny charging her cell phone on stage to read her “Pablo the Blowfish” lyrics. The “Wrecking Ball” creator said she had told Bono earlier that she had played Carnegie Hall once before, although without having been asked to. The first time around she decided to leave her balcony seat to sneak backstage to perform with Patti Smith, who was rocking out on stage. “I swear I was invited tonight,” Cyrus said.

The musician was even more forthright in capturing the spirit of Tuesday’s event for a crowd that included Francisco Costa, Ruby Rose, and Joel and Benji Madden. Cyrus said, “We’re celebrating. We’re not sitting here in sadness or in the shadow of [knowing] that we’ve got something so big that we’ve got to tackle. It’s not a sadness or a fear. I’m excited to be in a world — I just turned 23 and as a baby, I know I will live in an AIDS-free world one day.”

Honoring the Gateses, Colbert said, “I wasn’t sure who they were. I had to look them up on Bing.

“It turns out One was inspired by a conversation between Bill Gates and Bono about how to better inform Americans about extreme poverty around the world.” Colbert said. “If not for One, the only way that Americans would hear about poverty would be from Bernie Sanders’ speeches.”

While Clinton paid tribute to his friend Ibrahim, guests were reminded of another candidate — Hillary Clinton, who was featured in a photograph with Ibrahim on stage. Once the former president exited, Hozier simply took the stage with, “Rather tough act to follow.”

Before all of the performers closed out the night with “Still Haven’t Found What I’m Looking For,” Bono said, “In the end, it’s not celebrities nor personalities that change the world — it’s social movements. This here is one.”