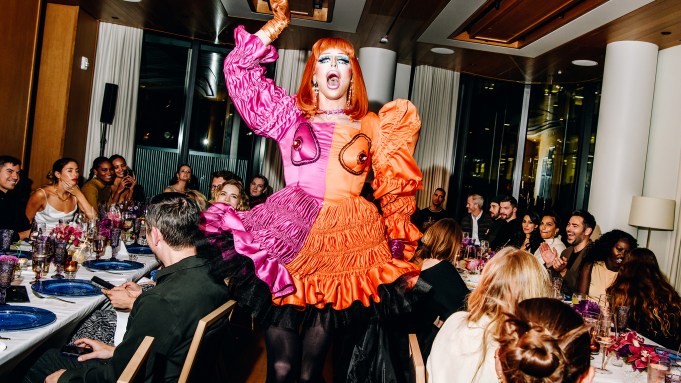 On Tuesday night, as New York Fashion Week hit its crescendo, Jonathan Simkhai invited an intimate group of friends and dedicated showgoers to a celebratory dinner at the newly opened Pendry hotel in Hudson Yards.

Inside the warmly lit cocktail lounge on the fifth floor, “And Just Like That” actress Sarita Choudhury chatted with Simkhai as guests including Cathy Ang, Jacquelyn Jablonski, Willa Fitzgerald, Erinn Westbrook and Amir Sidis-Simkhai caught up over Lalo tequila-based cocktails after a busy week out-and-about. “We love you!” Choudhury called out to Huma Abedin as the former political aide posed for photographers by the elevator bank. Mei Kowk, an early Simkhai supporter, DJ’d for the room.

“I went to a few events throughout the week, and it just felt like the first day of summer camp,” said Simkhai, who presented his collection earlier this week. “We have so much love for one another as an industry, always. Obviously so much hard work goes into it, and there’s so much stress with the idea of people liking it and how they’re going to respond to your collection — but then being able to let loose [is important]. Regardless of the outcome, these are my friends, these are my supporters, these are people that love me. And they show up for me, and I’ll show up for them. That’s what this is for me: the good, the bad, and the ugly.”

The lively crowd meandered into the adjacent room for dinner, where they were treated to a mid-meal performance by the drag queen Milk.

“I so enjoy our time together, as I’m sure most of these people do as well,” said Milk between sets, addressing the designer. “Congratulations on new seasons continuing on. Because that’s what seasons do: they change. But you know what? What do you think of my dress?” Milk twirled for the crowd, showing off their pink and orange look.

Because ultimately, all fashion week roads lead back to the clothes.