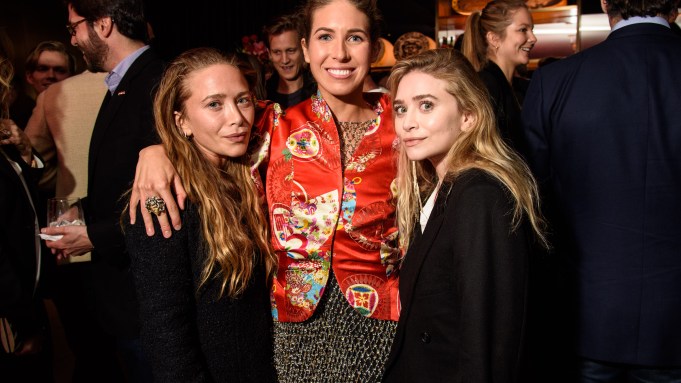 When she was but a middle-schooler, Colby Mugrabi did not dream of being a doctor or a lawyer like her classmates did. Mugrabi aspired to be a “designer’s muse,” she told her party guests Tuesday evening, and the moniker Minnie Muse was born.

Mugrabi started blogging and in 2008 began writing posts for Teen Vogue; years later Minnie Muse lives on in its second iteration as a new site of musings around the intersection of fashion, design, art and architecture, which Mugrabi celebrated Tuesday at the Lobster Club in New York.

The cocktail party was one of the very first evenings held in the yet-to-open restaurant, designed by Peter Marino. “I go way back with Jeffrey Zalaznick [of Major Food Group] whose restaurant this is, and my husband’s best friend is Aby [Rosen] whose building it is so it all came together beautifully,” Mugrabi said of scoring the venue for her bash.

The second iteration of Minnie Muse, which she promises is entirely a new concept, save the name, has been in the works for nine months, and allows her to share her overlapping interests from her personal life. While chatting, a friend with whom she had recently traveled to Japan came to greet her; they went on a food trip with a sushi chef from Masa restaurant.

“And that’s also why I started this site, is because I could take all of these experiences I have that I’m so lucky to be exposed to in my personal life and not necessarily document it, but use those experiences to feed into things that I cover on my site,” she explained, adding that Japan is a favorite destination where she traveled on her honeymoon. “We went to the Tadao Ando retrospective in Japan — he’s one of my favorite architects. So I started writing about Tadao Ando [on the site].”

Friends like Mary-Kate and Ashley Olsen, Thom Browne, Phillip Lim, Pamela Hanson, Greg Chait and more joined her in toasting the launch. Large-format examples of muse boards were on display, showcasing the Céline fall 2015 collection alongside Proenza Schouler’s fall 2017 line, and an example of a feature on exaggerated proportions included Balenciaga spring 2017 as well as art and design references to match.

“I’ve always been obsessed with fashion and then art and then design and then architecture since I was a little girl, so I wanted to do something that could fully utilize those core, specific interests and do it in the best way possible,” Mugrabi explained.

“Everything I do kind of feeds into something else. The logo I hand-drew after a visit to the Calder Foundation, when I was researching Calder jewelry and saw that Alexander Calder had these series called the ‘initial brooches’ where he would give brooches to friends and family and disguise their initials within the configuration of the brooch. So there was one he gave to his daughter Mary Rower with the letters ‘M R’ and he rendered the ‘m’ as a squiggly line so I took that idea and hand-drew my logo.”

Her obsessions fueling the site include the Fifties: “In terms of fashion, Balenciaga.…I’ve been obsessed with John Galliano since I was a little girl…The Row, which I’m wearing tonight with vintage Galliano…Céline, Prada,” she listed. “[For] architects, I love midcentury, I love David Chipperfield. And art, I love abstract and expressionist.”