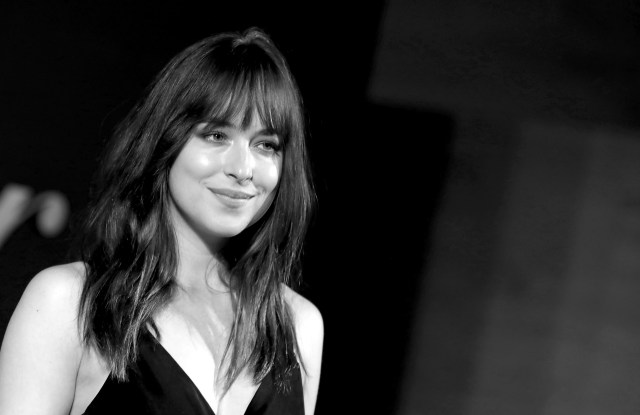 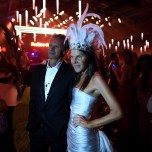 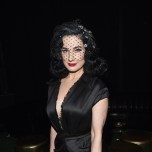 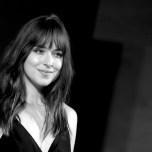 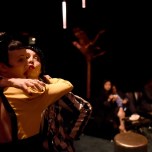 Cartier bellhops and trays of Champagne welcomed guests in a space transformed to look like the inside of a swanky jewelry box complete with golden palm trees, a raw bar and catering by The French Laundry chef Thomas Keller.

“I like these palm trees,” observed Miranda Kerr, who attended the Met Gala with Cartier earlier in the week. “They’re so timeless and elegant,” she said of the brand. However, the model didn’t plan on a long night. “My son wakes up early,” she said. “I have to make sure I’m up with him.”

“Apparently people are flying from all over the world to be here,” said French actress Julie Delpy. “It was a five minute drive for me,” she said. “I don’t know own any Cartier because I’m an independent filmmaker, so you know…that says it all. But I look at it. It’s a beautiful brand.” The Oscar-nominated writer and actress wore Vanessa Seward for the occasion. “She’s coming from Paris for the event,” she said. “She’s the one who invited me.”

Though jet-lagged Poppy Delevingne was going strong. “Everyone’s in a good mood,” she said. “There’s loud music, tequila — I’m very happy.” She soon admitted, “I just got off of a flight from London, so I’m going a bit mad.” The model-turned-actress said she’d be in town through Tuesday to attend the premiere of her new film “King Arthur: Legend of the Sword” on Monday. “It’s a Guy Ritchie movie, so he’s given it a modern twist and it’s completely unexpected,” she said.

Sasha Lane, clad in Stella McCartney, attended with her brother. “It’s always fun to get ready with him,” she said. “We were in the mirror trying on different outfits. I was like, ‘I need you to match me a little bit.’” The “American Honey” star recently wrapped “Shotgun” with writer/director Hannah Marks, but admitted was still relishing a role she’d played earlier in the week of “badass fairy goddess” wearing H&M at the Met Gala.

“I really like this energy,” Alicia Keys told the crowd, as she hit the stage following a performance by Lion Babe. “You ever been to a basement party? I don’t know if they do basement parties in L.A., but if they don’t let’s create one tonight. Let’s vibe a little bit right now.” With that, Keys launched into hits including “You Don’t Know My Name,” “If I Ain’t Got You” and “Fallin.’”

Ashley Madekwe, whose husband Iddo Goldberg hammed it up for photos with shock rocker Manson, said she was happy to be out. “I didn’t know what Cinco de Mayo was until I moved to Los Angeles,” she laughed, between bites of caviar. “I definitely want to stick around for the performances, but I’m getting old and boring. I’ll probably go to bed right after this.”