Hamptonites Party With a Mission

Alec Baldwin, Donna Karan, Kelly Ripa, Matt Lauer and Rufus Wainwright were among those partying in the Hamptons this weekend.

By Erik Maza and Leigh Nordstrom on July 26, 2015
View Slideshow 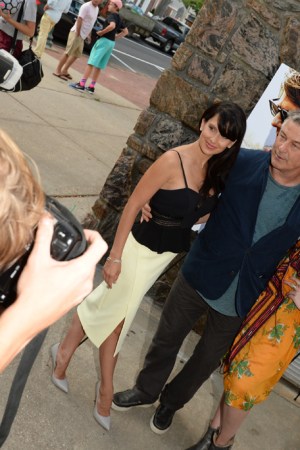 On Saturday night, Rufus Wainwright was in Water Mill, N.Y., considering the plight of those who summer out east.

He was at Robert Wilson’s annual benefit for the Watermill Center and all around the singer were New Yorkers who traveled long and far from their respective corners of Long Island to be there. He had journeyed from Montauk, others trekked from Fire Island — and in fact, a smaller few would return, for the annual Pines Party.

“Definitely during the summer, Long Island becomes the world. We become world travelers,” Wainwright said, always flitting between this and that benefit or party or, as is increasingly the case lately, political fundraiser. This past weekend, as it happened, was a particularly busy one around these parts  — from a “Mission: Impossible – Rogue Nation” screening Friday night to the annual scrum at the Super Saturday sale and, finally, Water Mill.

Alec Baldwin hosted the screening alongside his wife Hilaria, in East Hampton, and the film drew the summering crowd of Rudy Giuliani, Howard Stern, Christie Brinkley, Dan Abrams, Gayle King, Gregg Bello and Matt Lauer, who brought along his son.

“I love when they have screenings in the summer in the Hamptons, because I don’t go to the movies otherwise. And I love going to the movies,” said Brinkley, who was the last to walk the red carpet after some afternoon gardening held her up.

Abrams was one of many who have followed the franchise closely. “They’ve somehow managed to never have a total dud. To be on ‘Mission: Impossible’ number five, and to never have had a dud, to me that’s a win,” he said.

For Bello, who planned to spend the rest of the weekend playing tennis with Baldwin, it was all about the location. “It’s the prettiest place in the world,” he said of East Hampton.

After the action subsided, the audience spilled across the street to the Blue Parrot for summertime-requisite sangria and guacamole beneath string lights.

The next morning, Baldwin and King were again on the red carpet, this time at Super Saturday. The annual Water Mill luxe garage sale thrown by Kelly Ripa and Donna Karan had shoppers scoring Ralph Lauren, DKNY, Theory, Kiehl’s and countless other brands at heavily slashed prices, all for ovarian cancer research.

“I do anything I can to support the women’s health field,” said Rebecca Minkoff, balancing her little one on her hip as she walked the red carpet.

Rachel Zoe, who was enjoying the last of the Hamptons before heading back to L.A. to finish work on her spring collection, joined Minkoff in her sincerity. “I come every year. Ovarian cancer is sadly very close to me, and it’s a silent killer. Now I host the one in L..A,” she said.

The ever-jolly Dennis Basso gushed about his summer thus far. “Dijon, France, for wine tasting and cooking classes, Ibiza with friends, and I wrapped it up with Nicky Hilton’s wedding; I designed the bridesmaids’ gowns and Paris’ as well,” he said.

Then there was the evening hour. For those who are regulars of this scene, Wilson’s fundraiser is a consistent source of entertainment, an outlier amid a sea of beige. Performance artists, residents of the center, fill out the estate every year trying to live up to the promise of whatever Wilson’s theme happens to be that summer. This year, he called his annual carnival, appropriately, “Circus of Stillness: The Power Over Wild Beasts,” a reference to the poet Ezra Pound.

“Some of the works throughout my career deal with stillness and the power of stillness. Sometimes when you’re very still you’re more aware of movement than when you move a lot,” he said mystically.

In practice, that meant a noise band performing in a small room; a voguing break-dancer painting with his entire body, and an original performance from Sierra Casady of the band CocoRosie.

“I brought some songs and [Wilson] rearranged them,” she said. “How [Wilson] works is he’s in the moment and he does whatever he wants. Somehow, he regresses in age every year. At this moment, he’s, like, seven years old and he’s doing whatever he wants. You can’t contain his imagination.”

Nicole Miller, Jay McInerney, Fern Mallis and other Hamptonites made the rounds, but there were also a few surprising faces among the crowd, like the designers Dao-Yi Chow and Maxwell Osborne, who would actually be making the long voyage back to Montauk the following day for a dinner they were cohosting at The Surf Lodge with the artist Daniel Arsham.

“It’s pretty awesome any time you can carve out this much time in the middle of the Hamptons and you have body painting and talking polar bears, it’s a win-win,” Chow said, referring to two pieces in the production.

More incongruous was Nadya Tolokonnikova, the activist who ran afoul of the Russian government with her protest group Pussy Riot. It was, naturally, her first time out east and she’d already come up with a few ideas to shake things up.

“If I was one of these artists, I would do something with social things in it,” she said. “For example, have homeless people join our party.” Now, that, would give the Hamptons something new to talk about.