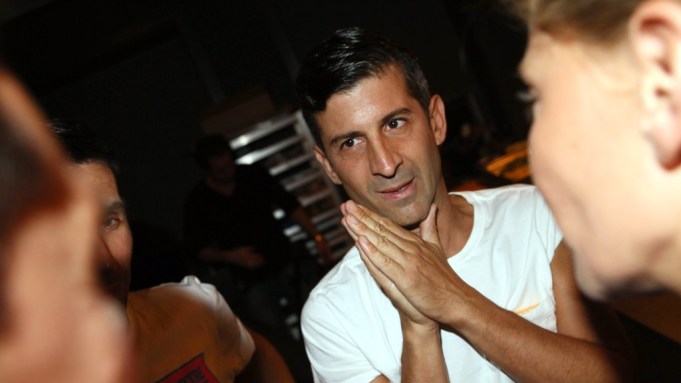 The gathering seemed to serve as a welcome respite from the crowded, circuslike parties so de rigueur of fashion week. Glenn O’Brien, in an all-white summer suit, was there to support his friend Saraiva and unwind from a long week.

“I can’t think anymore,” he said, glass of Champagne in hand. “I’ve been going out every other night. School started, so I have to be up at 7 o’clock in the morning. My kid’s in the eighth grade. I have to get him up at 8 a.m. I have to go to his room. I have to yell, ‘Get up!’ And then I have to make sure he gets up. I have to make him breakfast, pack his lunch and get him out the door. After that, I can’t go back to sleep. I’m too awake. I hate fashion week.”

André Balazs walked in exclaiming to friends that he was hungry, then sneaked out before dinner was served. Fleur du Mal designer Jennifer Zuccarini mingled with model, actress and Paris Review staffer Hailey Gates.

The four-course dinner, which commenced at 10 p.m., consisted of an amuse-bouche, roasted scallops, flatiron steak and a buttermilk panna cotta with olive oil cake, and capped off just before midnight.

“I always had the idea of one day to do a Champagne,” said Saraiva in his soft-spoken Franglais. “And so when I met Fabien [Gay] years ago, that’s his job — that’s his life. He wanted to do this project, and when he came to me, I said, ‘Let’s do it.’ Because I’m in the business, I know most of the Champagne is mass-produced — it’s more [about] the pocket than the product. But our brand is smaller than small; it’s about the quality. We only made 2,000 bottles.”

The ever-busy Saraiva made an Irish goodbye (er, a French exit) before the dinner formally ended; he had to run off to his friend Olivier Zahm’s dinner, then to the Top of the Standard for the biannual Purple magazine party.

“After fashion week, I have to go to L.A. for a bit, then Paris, then back to New York. We might do another Le Baron in Shanghai,” he said.