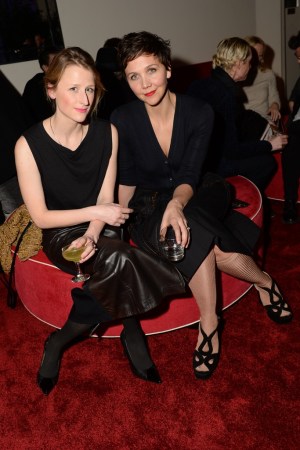 All of the furniture at The River Club on Manhattan’s East Side was shrouded in white sheets for the debut of the ninth installment of Miu Miu Women’s Tales, the label’s ongoing collaborative short film series.

But it wasn’t a precaution against the hundreds of attendees balancing glass vessels of sticky Champagne and cocktails. It was “part of Miu Miu’s vibe,” said one of the club’s employees, though the decorations did double as protection (and for good reason: Exclusive members reportedly pay $10,000 a year in dues.) The venue looked quite unlike what some of its boldfaced members, which include Henry Kissinger and David Koch, are accustomed to. The interior was dressed up to resemble a scene from Alice Rohrwacher’s short film, “De Djess,” which was set at the Hotel Excelsior during the Venice Film Festival. “I just decided to freeze the moment and select all the elements that were there — paparazzi, actresses, the sea, the housekeepers, the dress,” said Rohrwacher, a young filmmaker who knows the film festival circuit well — her 2014 drama “The Wonders” won the grand prize of the jury at the Cannes Film Festival.

Among the crowd that wove through the spiral staircases and low-ceilinged side rooms were Maggie Gyllenhaal, and a handful of pretty young things doing their best to embody that elusive Miu Miu vibe — Mamie Gummer, Bonnie Wright, Sami Gayle, Hanneli Mustaparta, Paige Reifler and Tali Lennox. There were a few guys there too, if only to act as a foil to the girls — Ed Skrein, a star of “Game of Thrones,” and Willem Dafoe and Dane DeHaan, who have both appeared in Prada campaigns.

“I did a campaign for Miu Miu, I don’t know, 10 years ago or something,” said Gyllenhaal. “That’s how they got me to come tonight.” For Wright, who’s thus far best known as Ginny Weasley in the “Harry Potter” series, the brand has supported her transition from acting to writing and directing. “I showed a short film with Miu Miu in London called ‘Separate We Come, Separate We Go’ — that was my graduation project from film school that I took to Cannes Film Festival,” she said. “Mrs. Prada always pulls something out of the bag that no one has done before.” Not a bad role model for someone developing her first feature. The working title is “Have a Nice Day.”