Miu Miu Goes to the Movies

A fashionable crowd turned out in Beverly Hills Tuesday for a viewing of Lucrecia Martel’s short film “MUTA,” which features the brand’s eyewear. 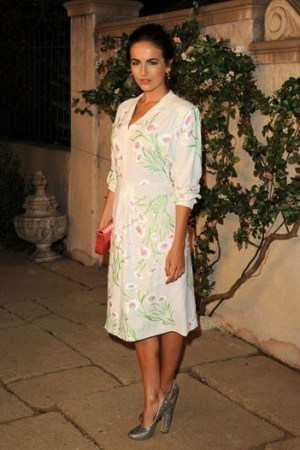 Not every movie premiering in Hollywood this summer is a superhero action film. Starlets gathered at a Forties-era Beverly Hills mansion on Tuesday night for a Miu Miu-hosted al fresco screening of Lucrecia Martel’s short film, “MUTA,” which featured the brand’s latest collection of eyewear.

After the five-minute reel, in which models fluttered around like moths, Camilla Belle, whose sequined dress was also featured in the film, said, “I’m still trying to digest that. I think I need to see it again.”

In the stone courtyard, pink-haired cigarette girls carried trays of sunglasses, trailed by a staffer taking Polaroids of guests trying them on. After deciding on a gold pair for her photo op, Liz Goldwyn asked, “Do we get to keep them?”

“No, but you get to keep the Polaroid,” replied the staffer.

Elsewhere, Alice Eve and Hailee Steinfeld (who appeared to be at the party with Tavi Gevinson) caught up with friends alongside a tile fountain while waiters served whole salmon and trout and other seafood hors d’ouevres. Some guests, including China Chow and Marilyn Manson, missed the short altogether while they were catching up on the balcony.

“Let’s get together when I’m in town,” Malin Akerman told her “happythankyoumoreplease” co-star Kate Mara as she beat an early exit.