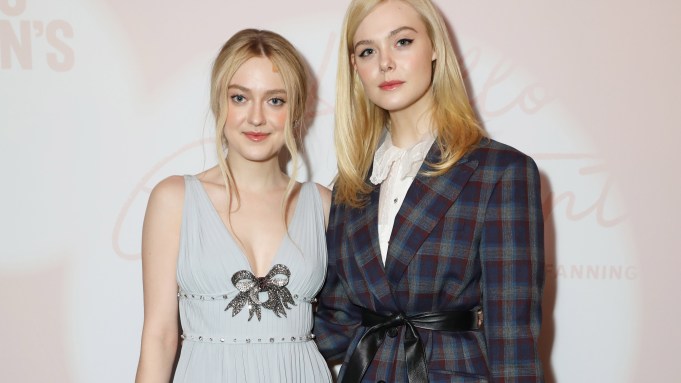 Dakota Fanning made her directorial debut on Monday night with “Hello Apartment,” the 15th short film commission in the Miu Miu Women’s Tales series that tells a sentimental story of Ava, a young woman played by Eve Hewson, who moves into a new apartment and documents the highs and lows of the years that follow.

At the screening hosted by Miu Miu at the Curzon Cinema in Mayfair, Fanning said the film, which was written by Liz Hannah (cowriter of Oscar-nominated film “The Post”), was inspired by her own life. “I moved to New York when I was around 17. My mom stayed with me in my apartment until I turned 18, and then she left and I was on my own there,” she said. “I have lived in that same place for the last almost-seven years; it has seen the worst and best of times for me. I am someone who is nostalgic, and sentimental, especially with objects, the memories that are connected to those objects.”

Fanning added that the experience of being in her apartment following a break-up also inspired the film. “I went through and removed all the items that [were like a] painful reminder,” she said. “It was from that and how memories are connected to our surroundings, and the marks we leave behind [that also inspired ‘Hello Apartment’].”

Fanning, who has been making movies since the age of six, said she’d wanted to try her hand and directing for as long as she could remember.” Ultimately, I just wanted to control everything,” Fanning said. “I am a pretty calm person naturally, or just a pretty confident person, [but] I underestimated the amount of sheer panic that I would feel at carrying the responsibility for this group of people.” She named Kelly Reichardt and Ol Parker as her main influences, explaining that Reichardt is “the perfect balance of calm on the outside and super strong [on the inside]” and Parker, who she praised as being “the epitome of never letting anyone on set see him flustered, he always seems in control — which I have now learned isn’t the case.”

She assembled a cast and crew of friends because she wanted to create something that felt personal on screen, casting Hewson as the lead, Tom Sturridge as Ava’s love interest and recruiting cinematographer Bobby Bukowski to help her capture the Miu Miu costumes, which were styled by Fanning’s own stylist, Samantha McMillen.

“It’s actually very hard to make Miu Miu blend in; it’s super unique and beautiful and immediately it catches your eye. [But] I wanted to make [the film] feel as authentic and natural as I possibly could…I didn’t want [Ava] to be this unicorn against people dressed really plainly but [she] is in complete Miu Miu every time you see her,” Fanning said.

Hewson told WWD that Fanning offered her the role via text message and she accepted with no questions asked. “I was like, ‘Sign me up!’ I would do it for her in a heartbeat for her,” she said and added that Fanning was more than competent on the other side of the camera. “She is a boss. Obviously, because she grew up doing it, she knows how to run a set….She is also very smart, confident human being, she knew exactly what she wanted, she pulled the shots really easily. Everyone completely believed in her.”

Sturridge was even more effusive in his praise: “She is incredible. She is such a confident actress that translated simultaneously as a director,” he enthused, and joked that she pushed him to the extremes of his craft. “I mean, she’s so inspiring,” he added with a wink,”people talk about DiCaprio in ‘The Revenant’; bulls–t, this is the limit.”

After the screening, Miu Miu joined forces with Love magazine to throw a party at Loulou’s with Fanning’s little sister, Elle, who was the picture of sororal pride. “I am just so proud, it’s so cool, I loved it.  It’s just so nice because our mom is here, and Dakota’s birthday is just around the corner and we’re all together,” she told WWD.